The incident which occured in Seeta, Mukono over the weekend has attracted a backlash from members of the public as well as the Police leadership itself. Namaganda was allegedly assaulted after she stopped the vehicle in which Kyaligonza was moving, for flouting the traffic guidelines.

Gen Kyaligonza’s body guards L/Cpl Peter Bushindiki and Pte John Robert Okurut have since been arrested by the army and are set to be court martialed as well as face criminal charges of assault.

While reading the DP President’s statement to the media on Tuesday, Mao’s Presidential Press Secretary, Fred Mwesigwa noted that the conduct by Gen. Kyaligonza’s body guards is a result of their boss’ continuous attack on several Ugandans.

“We condemn the disgraceful conduct of Maj Gen Matayo Kyaligonza, Ugandan Ambassador to Burundi, member of historical command council of NRA and NRM Vice President for western Uganda and his bodyguards who assaulted and humiliated a police officer, Sgt. Esther Namaganda,” Mao noted in a statement.

Mao said this is not the first incident in which Kyaligonza has behaved in such a senseless manner.

“Some time back, somebody was killed at his building site in Makindye Division. In 1989, Kyaligonza assaulted a police officer ASP Tumusiime at Jinja Road and went away with it! Now it’s Namaganda! This is a sign of gross impunity that Ugandans are suffering every other day,” Mao said.

Mao asked Ugandans to stand up against this level of impunity that is being exhibited by a few individuals.

“This behavioral pattern must stop. We call on Gen. Kyaligonza to apologize to Sgt. Esther, the Police fraternity in particular traffic police unit, women and to all Ugandans for behaving disgracefully,” Mao said.

The party has also demanded that President Yoweri Museveni recalls Kyaligonza back from Burundi.

“Lastly, D.P has decided to prosecute Gen. Kyaligonza in courts of law in line with our principle of fighting for human rights and freedoms in this country at all times.”

The revelation by the opposition party regarding prosecution of Kyaligonza comes a day after the Uganda Law Society (ULS) made a similar pronouncement.

Simon Peter Kinobe, the ULS President in a statement on Monday asked that security agencies expedite the investigations into the incident, short of which the laywers’ body will prosecute the accused individuals.

Kinobe said that ULS will continue to monitor the developments during the investigations “and if no satisfactory action is taken, the ULS will not hesitate to bring prosecution against all the parties involved” and “seeking available remedies as per the laws of Uganda”.

“We reiterate that impunity has no place in a democratic society,” Kinobe said. 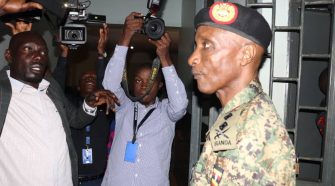 Gen Kayihura Released on Bail, Ordered Not to Leave Kampala