Medical doctors under their umbrella body, Uganda Medical Association (UMA) have paid tribute to one of their own, Dr. Catherine Agaba from the International Hospital Kampala (IHK) whose body was found lying in a septic tank at her home in Muyenga.

Dr. Catherine went missing on April 13, 2019 but Police would later report that her lifeless body had been recovered in a septic tank on Sunday.

The Chieftaincy of Military Intelligence (CMI) had tracked a suspect in the murder of the doctor, to Loro Trading Centre in Apac district, and is said to have confessed to the crime.

The suspect was identified as Kenny Ronald, 24, who was guarding the apartments in Muyenga where the deceased doctor was resident.

UMA President, Dr Anthony Obuku Ekwaro said he had learnt “with great sorrow” about the “gruesome murder” of their very own, Dr Cathy Agaba, whom he described as a rising star.

“We, doctors of Uganda, mourn with the family. We understand that Dr. Agaba was the family vanguard, morning star and darling of her Father “Mzee Agaba”. We pray the Lord gives you strength to overcome this trying moment,” Obuku said.

“Dr. Agaba was a young, brilliant, hard working woman full of life and with a promising future. Dr. Agaba represents the youths who are the majority and hoping for a safe and prosperous Uganda that works for every citizen. It remains a wont that Dr. Agaba met her demise in the hands of a fellow Youth for, prima facie, trivial reasons (fear of job loss & want of household material items),” Obuku noted.

“Our Treasurer UMA Busoga Branch was assassinated months ago, gunned down at his home; the criminals are yet to face justice. While we commend strongly the security forcez for taking quick action to bring Dr. Agaba’s murderer to book; we implore the Police leadership to invest more in prevention and fighting crime rather than tear-gas and similar items that do not necessarily benefit the common Ugandan citizen,” Obuku noted.

The UMA President appreciated members of the Association in Kampala including the management of International Hospital Kampala who raised the flag to the public, as soon as news came in about Dr Catherine’s disappearance.

The medics are also demanding the release of their colleagues who had been detained on suspicion of the murder.

“We request the Police to immediately release our members and fellow Doctors including Dr. Mohammed Hassan Mohammed, Catherine’s boyfriend, following due process (e.g. Police Bond) now that the suspect has been identified, detained and awaits justice,” Dr Obuku said. 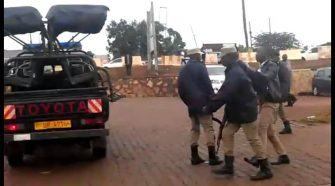