Two senior members of the Forces for the Liberation of Rwanda (FDLR), a Rwandan rebel group based in Democratic Republic of Congo (DR Congo) have been extradited to face criminal charges back home, government officials in DR Congo told this news website.

Congolese government spokesperson Lambert Mende told this SoftPower News on Tuesday Ignace Nkaka who has been the spokesperson of FDLR and Theophile Abega, head of the group’s intelligence arm have been extradited.

“We have an agreement with Rwanda to arrest these suspected criminals,” Mende said.

The two senior rebel leaders were arrested last month in DR Congo. Addressing reporters in the capital Kigali last month, Kagame said two or three of Rwanda army soldiers were killed when Forces for the Liberation of Rwanda, which has links to perpetrators of the 1994 genocide, attacked Rwanda on December 9.

The news about the arrest of FDLR spokesperson was first announced by Rwanda’s Foreign Affairs State Minister, Olivier Nduhungirehe on Twitter, describing the FDLR as a genocidal and subversive movement.

“I hope that he (Nkaka) will be repatriated to Rwanda,” Nduhungirehe said in a tweet.

DR Congo, almost the size of Western Europe, has struggled for two decades to defeat dozens of local and foreign militias in its east, which is home to deposits of tin, gold and coltan. 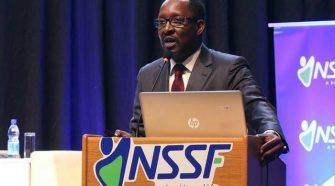 NSSF Interest Rate Drops by 1% as Membership Grows to 1.7M