The World Health Organization (WHO) has warned that the increasing spread of Ebola in DRC, largely facilitated by the continuous attacks by armed groups, risks spreading the disease to neighboring countries including Uganda.

The latest statement issued by WHO indicates that as of May 7, a total of 1600 confirmed and probable Ebola virus disease cases have been reported, of which 1,069 died (case fatality of 67%).  This makes the latest outbreak of the deadly haemorrhagic fever, the worst in the country’s history.

Of the total cases with recorded sex and age, 57% (907) were female and 30% (475) were children aged less than 18 years. The number of healthcare workers affected has risen to 97 (6% of total cases). 442 EVD patients who received care at Ebola Treatment Centres (ETCs) have been successfully discharged.

On Friday, Tedros Adhanom Ghebreyesus, the WHO director general said he was “profoundly worried” by the rate of Ebola transmission.

“I am profoundly worried. The increased transmission rates raise the risk of Ebola spreading in DRC and to surrounding countries,” Tedros said in a tweet, adding that “a major surge in political & financial support from all national & international actors is urgently needed to help stop this outbreak”.

He said that a series of attacks disrupted Ebola response activities in DRC this week.

“Most operations have resumed, but unfortunately we expect that the disruptions and backlog in lab testing will result in a rise in the number of cases reported in the coming days,” he said.

When health workers cannot reach people, he said, they (people) do not get the chance to be vaccinated or to receive treatments if they fall ill.

“The tragedy is that we have the technical means to stop Ebola, but until all parties halt attacks on the response, it will be very difficult to end this outbreak”.

He saluted the courage demonstrated by frontline responders as well as the determination of everyone working behind the scenes to end the Ebola outbreak in DRC.

In its statement, WHO said in Butembo and surrounding health zones, response activities were repeatedly halted due to a number of serious security incidents taking place from May 4 to 6.

WHO further says on May 3 in Katwa, a Safe and Dignified Burial (SDB) team was violently attacked following the completion of a burial for a deceased EVD case and on 8 May, another group of over 50-armed militia infiltrated the city centre.

Security forces repelled the attack following intense gunfire in close proximity to staff accommodations making work very hard though the team resumed a day ago after almost five consecutive days of suspension, in fear of further attacks against EVD response teams and facilities.

“These security incidents, and especially the resultant lack of access to EVD affected communities, remain a major impediment to the response, with teams unable to perform robust surveillance nor deliver much needed treatment and immunizations” reads the statement.

“Without commitment from all groups to cease these attacks, it is unlikely that this EVD outbreak can remain successfully contained in North Kivu and Ituri provinces”.

Acoording to the organization, Ebola virus disease transmission remains most intense in Katwa, Butembo, Mandima, Mabalako, Musienene, Beni and Kalunguta hotspot health zones, which collectively account for the vast majority (93%) of the 303 cases reported in the last 21 days between April 17 and May 7 2019.

During the same period, new cases were reported from 78 health areas within 15 of the 21 health zones affected to date.

The warning by the WHO director is cause for further heightening the already intensified surveillance and screenings at Uganda’s border points with DRC.

Last month, Uganda’s Ministry of Health said government is to support 20 districts along the DR Congo border with a total of Shs 3.2 billion to help them in the fight against the Ebola virus.

Dr Muruta Allan Niyonzima, the Assistant Commissioner Disease Control and Health Services in the Ministry of Health, said the money will be sent to districts bordering DRC to help them in mass education and procuring facilities.

Recently, the Minister of Health in charge of General Duties, Sarah Opendi said that the team of health workers is camped at the Uganda – DR Congo border to screen between 5,000 and 10,000 people that cross to Uganda from DR Congo for trade.

“Our teams have done their best to screen everybody that comes from DR Congo into Uganda,” Minister Opendi said.

Accordingto Minister Opendi, Uganda is extremely prepared to attend to any Ebola case once reported in any part of the country. 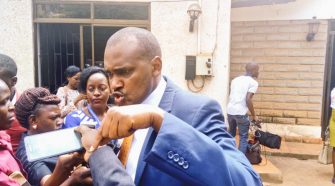 Opposition Leaders are too Power Hungry to Unite, Says Tumwebaze