Former warlord also ex Vice President, of the Democratic Republic of Congo, Jean-Pierre Bemba has said that he could be the most suitable candidate for the Presidential race in the DRC scheduled for December this year.

Bemba said that his previous political positions in the DRC make him competent enough to run for the top job. He was recently freed from the Hague in the Netherlands after his war crimes conviction was quashed on appeal at the International Criminal Court (ICC).

Although the current government led by President Joseph Kabila insist that the former rebel is not eligible to run for President because of a former corruption conviction, Bemba said in an interview with BBC that he has an upper hand.

“I am not speaking from a point of boasting but I have had wide experience previously; I have presided over the economy and financing of the Congo, as Vice President,” Bemba said.

“I think that my position as Senator today makes me a really bigger candidate among probably all those candidates,” he added.

He added “I am very confident that I can bring solutions to my country.”

The delayed Presidential election seeks to choose a successor for Kabila whose constitutional regime (second and final term in office) ended two years ago. Kabila has ignored calls from the U.N, the church in DRC, opposition and rights campaigners to step down as instability continues to rock the country.

At the International Criminal Court (ICC), Bemba faced charges related to war crimes committed in CAR by soldiers under the Movement for the Liberation of Congo (MLC), a group he led.

Asked to comment on whether he feels the moral responsibility towards the victims of the crimes, he said; “I feel sympathy for the victims of CAR or any country”.

“I can say i am very sad from what I hear in the Central Africa Republic up to now. For the last 18 years, this country has been fighting among themselves. I hope they will succeed to get a safe process to bring peace to that country because they deserve it,” Bemba said.

On what his relationship with the incumbent President Kabila is today, Bemba said that the two have no relationship, neither has there been contact even during his time in incarceration.

Bemba said that if he is invited to Kinshaha for talks with President Kabila, he is willing to engage.

“Civil dialogue must take place always. Not just for today, but also for tomorrow. We have to live all together. The majority today will be the opposition tomorrow,” Bemba said to BBC.

On whether there is a possibility of taking up arms in case he disagrees with the outcomes of the December election, Bemba responded saying guns are out of the question.

“In 2003, we gave up all our guns and became a political party. So this story of the gun is over for the MLC”.

Bemba, currently in Belgium is expected to return to DRC this week.

Jean-Pierre Bemba was one of four vice-presidents in the transitional government of the DRC from 17 July 2003 to December 2006. He received the second-highest number of votes in the 2006 presidential election. In January 2007, he was elected to the Senate. 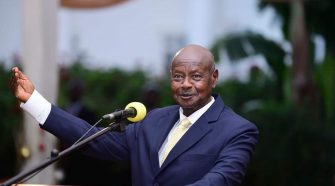