At a meeting of the African Heads of State last week convened by the AU Chairman, President Paul Kagame of Rwanda, the leaders queried the DRC electoral Commission provisional results citing “serious doubts” and called for a delay of declaration of final results until an AU delegation has interacted with the stakeholders in the impasse to forge a solution.

The meeting in Addis Ababa was attended by among others President Museveni of Uganda who is the Chairman of the East African Community, Idriss Deby of Chad and Prime Minister Abiy Ahmed of Ethiopia.

Addressing the media on Monday at the party headquarters in Najjanankumbi, the party Spokesperson, Ibrahim Semujju Nganda said that as a party, they have followed events in DRC and are happy that there has finally been an election in Congo.

“At least with all their weakness, they will have one person transferring power to another. It is an experiment, we can only hope and pray that it works because the moment Congo has problems, Uganda will share in those problems,” Semujju said.

Semujju said, “What was also of concern to us as a party is the behavior of the African Union. You have Museveni here who has been cheating elections. A report of the former Nigerian President Obasanjo who came here to observe elections on behalf of the AU noted that the election would not be desired to happen again elsewhere.”

Semujju said that the same AU with a report indicting Uganda’s election went ahead to congratulate Museveni but now in Congo, they are saying they can’t congratulate Felix Tshisekedi before they undertake investigations.

The FDC spokesperson said that the same standards that are used against some leaders should be used across without segregation.

“This continent has problems and they are not about to end because we want to have the same standards. If there are issues in elections in Congo, you can raise them but when they are in Uganda, you raise them but go ahead and congratulate Museveni” he told the press.

Semujju advised the AU leaders to avoid being seen as working for the stay in power of a few leaders but rushing to exercise powers on other leaders.

On Sunday, the AU made a U-turn on their earlier scheduled visit to Kinshasa but did not give reason for postponing the visit (by the AU high-level delegation) which was slated for Monday.

The cancellation of the visit followed the ruling by the constitutional court in DRC which upheld the provisional results by the electoral commission declaring Felix Tshisekedi as winner of the election.

It also came at a time when observers had begun to raise questions on the AU’s premature decision to delay election results which some said undermined the powers of the Congolese courts of law. Some analysts said that AU ought to have waited for the decision taken by court lest it would be seen as meddling into the affairs of DRC. 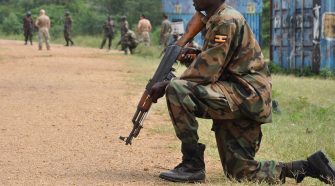