Fayulu said the results were an “electoral hold up” that were “rigged, fabricated and invented” and do “not reflect the truth of the ballots.”

He called on the Congolese people to “rise as one man to protect victory.”

According to the Electoral Commission head, Corneille Nangaa’s announcement made at a press conference Thursday at 3am, Tshisekedi won the election with 38.57 percent of more than 18 million ballots cast.

Tshisekedi received more than seven million votes compared with about 6.4 million for Fayulu, who had warned against manipulation.

Fayulu has now called on the Catholic Church to release the results it got from its team of 40,000 observers who recorded voting tallies posted at each of the polling centers.

Last week, the Catholic Church said their observations showed a clear winner but they didn’t specifically mention whom. Days prior to the election, an opinion poll had placed Fayulu ahead of the other contestants with 47%, at least 20 points ahead of Tshisekedi.

“How long are we going to negotiate results?” asked Fayulu.

After the results, Fayulu said he categorically rejected the outcome and called for the release of the name “of the person who really was our people’s choice.”

French foreign minister, Jean-Yves Le Drian also said that the election results did not match what was witnessed during the vote count.

Shadary’s spokesperson, Aime Kilolo, said the electoral commission’s announcement of Tshisekedi as the winner was “the will of the people.”

Antonio Guterres, the United Nations secretary general, said he “takes note” of the announcement and urged all parties to “refrain from violence and … to channel any electoral disputes through the established institutional mechanisms.” 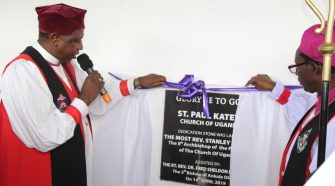