The Electoral Commission in the DRC has declared Felix Tshisekedi, the leader of the main opposition party, winner of the recent Presidential election.

Congo went to the polls on December 30 to elect their next President to suceed Joseph Kabila who has ruled the country for 17 years.

In what was a surprise declaration to many, Tshisekedi was Thursday announced as the winner of the elections. This is a historic step in DRC’s politics since the country has not had a peaceful transition of power in its 59 years of independence.

Tshisekedi told thousands of cheering supporters in Kinshasa that he would be the president “of all Congolese”.

“Where did the extra seven million votes come from [for Tshisekedi’s victory]? In 2019, we refuse that the victory of the people be stolen once more,” he said.

Days prior to the election, an opinion poll had placed Fayulu ahead of the other contestants with 47%, at least 20 points ahead of Tshisekedi.

Antonio Guterres, the United Nations secretary general, said he “takes note” of the announcement and urged all parties to “refrain from violence and … to channel any electoral disputes through the established institutional mechanisms.”

The election in the DRC had been delayed for more than two years following numerous postponements by Kabila’s government. The international community had piled pressure on him to ensure he respects the Constitution as well as refrain from use of violence.

When the election finally took place in December, some parts in Eastern DRC which is faced with an Ebola crisis and armed insurgency, could not participate.

While the Electoral Commission – CENI – made the announcement, riot Police were deployed in the capital, Kinshasa, amid fears of a disputed result. 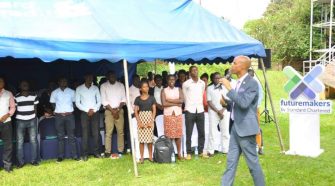