The health authorities in the Democratic Republic of the Congo (DRC) have announced plans to introduce a second experimental Ebola vaccine starting next month.

Manufactured by Johnson & Johnson, the vaccine which is given as a 2-dose course, 56 days apart, will be provided under approved protocols to targeted at-risk populations in areas that do not have active Ebola transmission as an additional tool to extend protection against the virus.

WHO Director-General, Dr Tedros Adhanom Ghebreyesus said that in deciding to deploy the second experimental vaccine to extend protection against this deadly virus, authorities in DRC have once again shown leadership and their determination to end this outbreak as soon as possible.

“The evaluation of the second Ebola vaccine will help ensure that we have potentially an additional tool to prevent the expansion of the outbreak and also a potential tool to protect populations before outbreaks hit areas at risk,” said Dr Matshidiso Moeti, WHO’s Regional Director for Africa.

The Johnson & Johnson vaccine will complement the current vaccine (rVSV-ZEBOV-GP, manufactured by Merck), which has proven highly effective and safe, and which has helped protect thousands of lives.

The Merck vaccine will continue to be provided to all people at high risk of Ebola infection including those who have been in contact with a person confirmed to have Ebola, all contacts of contacts, and others determined to be at high risk of contracting Ebola.

To date over 223,000 people have received this vaccination during the current outbreak.

The current Ebola outbreak in DRC has killed over 2,000 people with a mortality rate of 67%. This is comparable with the 2014-2016 West Africa outbreak, when tools such as the vaccine and therapeutic treatments were not available.

In May 2019, WHO’s Strategic Advisory Group of Experts on Immunization (SAGE) reviewed use of vaccines in the ongoing Ebola outbreak and issued recommendations.

These included adjusting the dose of the Merck vaccine, evaluating a second vaccine under appropriate protocols, changing strategies when insecurity makes it difficult to reach people – such as providing pop-up vaccination stations — and increasing the number of people vaccinated within communities with ongoing transmission, sometimes vaccinating whole villages.

“In everything we do, we are driven by science,” Dr Tedros said.

“The advice we were given by SAGE in May has been applied, always taking into account community needs and preferences, as we know this will make the approach more effective. The changes made have saved thousands of lives in this outbreak.”

New therapeutics and better use of treatment protocols have also saved many lives.

“To date, 973 people have been successfully treated and released from Ebola treatment centres, and we expect that the 1000th survivor will return to his or her community in the coming weeks,” Dr Moeti said.

Merck has provided WHO with 245,000 doses for DRC and neighbouring countries and built a stockpile of 190,000 doses that are ready to send to DRC. Merck also aims to release 650,000 doses over the next six to 18 months under its replenishment strategy.

Under the current SAGE recommendations this means that there are 390,000 doses currently and additional 1.3 million doses will be available.

“The Merck vaccine is highly efficacious, and we’ll soon have a second vaccine to increase the number of those being protected against the virus”, said Dr Tedros.

“But vaccine and therapeutics are only some of the tools — the key to ending the outbreak is community ownership. With the communities fully engaged, and with all partners stepping up and rallying behind our common goal, we can and will end this outbreak.” 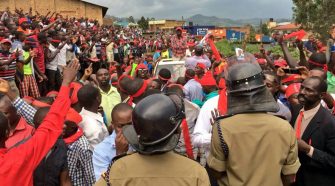