Uganda’s Civil Aviation Authority (CAA) has Wednesday conducted what is termed as a full scale emergency exercise, a drill to test for Entebbe International Airport’s readiness in case of an emergency involving a passenger aircraft hijack and aircraft crash.

The drill exercise kicked off at 8am and involved hijack simulation of a Speed Air (pseudo name) flight TA 042 with 82 people on board.

In a statement, CAA said the exercise assumed that the ‘hijacked aircraft’ was flying over Uganda’s airspace and the pilot was forced to land at Entebbe airport.

After a protracted ‘hostage negotiation and rescue mission’ was accomplished, the aircraft was then cleared to proceed to its final destination, but would later ‘crash’ on take-off on runway 12/30 with 78 passengers and crew on board.

“It was presumed that some people lost their lives and a number of survivors were critically injured, which sparked off an emergency situation involving fire fighters and other rescue agencies that we called in to save lives,” CAA said in a statement.

CAA’s Fire Fighting and Rescue Services personnel put down the ‘ensuing fire’ as medics from various hospitals were summoned and they promptly responded. Several ambulances and medics staff swarmed the ‘crash’ scene where ‘victims’ were ‘rescued’.

The Authority said the critically injured passengers and crew were rushed to hospitals in Entebbe and Kampala.

The exercise is a mandatory requirement of countries that are contracting member States of the International Civil Aviation Organization.

The last of such an exercise was conducted in 2016.

By publication time (mid-day), the drill was still ongoing, according to the CAA Public Relations Officer, Vianney Luggya.

Luggya told SoftPower News that thus far, the drill had “signs of success written all over it”.

“As we speak, I am looking at a Police helicopter taking off with the presumed injured passengers,” he told this news website.

He said that the negotiation with the hijackers during the first phase of the emergency lasted about one and a half hours. At one point, he said, the negotiation broke down and the team had to engage forceful means during which three ‘hijackers’ were put out of action and one ‘arrested’.

The crew and passengers were in good shape, he added.

Asked about how long it took for the first respondent (emergency services) during the ‘crash emergency’, Luggya told SoftPower News that at the end of the entire exercise, there will be a debriefing which will give details of response time and other assessment areas.

The exercise is witnesses by observers who make video recordings of the process, taking note of whether the emergency personnel are doing the right thing and in what duration. 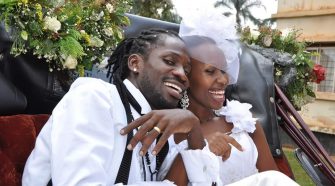