Otto Goddy, the Omoro district driver who used a government ambulance Reg number UG 3506 M, to ferry bricks to his construction site, has been apprehended by the State House health-monitoring Unit.

Despite writing an apology to the district’s Chief Administrative officer (CAO) Akera John Bosco, for his misconduct, Otto was on March 26 relieved of his duties, pending investigations.

In his letter of apology, Otto said the bricks were only a short distance from his construction site and they had been transported by a lorry a day before. He said the lorry mistakenly dropped the bricks by the roadside, prompting him to move them to the exact point using the ambulance.

“In the circumstances, it is probable that this is not the first incidence in which you have misused this vehicle or used it without authority. Besides, you did not (in his apology letter) state how many bricks you ferried using the said vehicle. This information necessitates a further investigation,” the CAO wrote back to the Driver.

“In view of the aforementioned, you are hereby, in accordance with subsection F-S (8) of the said Uganda Public Service Standing Orders (2010), interdicted from the exercise of your duties and functions of driver, with effect from the date of this letter pending further investigations,” added the CAO.

The CAO said that as investigations continue, the interdicted driver will receive half of his basic salary but is allowed to travel out of the country.

Now, the State House Health Monitoring Unit led by its Director, Dr Jackson Ojera has arrested Otto over his act.

Ojera also demands that district leaders provide explanations on why government cars are being misused including drugs for nodding disease victims. 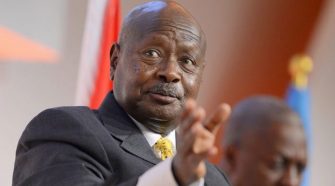