KAMPALA – The Secretary General of the East African Community (EAC), Dr. Libérat Mfumukeko has said that the regional body is working to resolve the current impasse between Uganda and Rwanda.

He said that as has been the case previously, the EAC through its established mechanisms is engaging the parties in the conflict to find a solution.

“Occasionally, we have periods when there are issues but as EAC all our countries are aware of such incidents. And mechanisms are in place to track down these non-tariff barriers or when there is a situation which can be problematic to the community,” the EAC Secretary General said.

He was Wednesday speaking at a news conference at the head offices of Uganda Investment Authority (UIA) in Kampala.

The EAC Secretary General is in Kampala on a working visit to follow up on the implementation of the 5th EAC Development Strategy which was adopted during last year’s EAC Heads of State Summit. The strategy places the private sector and industrialization among the Community’s top priorities.

The implementation of this strategy is premised on the cognisance of the high problem of unemployment across the region, which Mfumukeko noted can not be only addressed by the governments without the involvement of the private sector.

“Concerning Rwanda and Uganda, these are things we talk about on a regular basis. Our ministers in charge of Trade, Industry and Investment have their platform in the community,” he told reporters.

He said the Ministers and technical committees hold regularly meetings and that they are already appraised with the situation.

“These issues we are talking about now are being dealt with. We have a way of resolving them,” Nfumukeko told reporters without particularly pointing out at what level the engagement is and whether there has been progress thus far.

“Do not think we are just watching. We have our ways of dealing with that technically and diplomatically, but the fact is – no one wants to see such kinds of problems,” he added.

He said that regional countries including Rwanda and Uganda “have had traditional ties” adding that “i would not be lying to say Ugandans and Rwandans, Rwandans and Burundians, we know each other very well”.

“We’ve been cohabitating for many years. And you know when you live in the same house, because now we are a family as EAC, you know what happens. With your brothers and sisters, you quarrel once in a while. And what do parents do? They try to bring you together. As a Community, we have these frameworks for peace and security to resolve these issues whenever such tensions arises between countries,” he added.

There is growing animosity in relations between Rwanda and Uganda. There has recently been a diplomatic row between the Kigali and Kampala administration, sparked by the closure by Rwanda of the main border over two weeks ago.

The closure left over 100 trucks loaded with cargo stuck at the border causing a customs paralysis for over a week. The cargo was diverted ordered by Rwandan authorities to use alternative routes of Mirama hills and Kagitumba, but these border points had also been closed.

In the recent days that followed, the Foreign Minister for Rwanda, Richard Sezibera said the government was strongly advising Rwandans against traveling to Uganda, lest they would face detention or deportation.

Uganda on the other hand has said the Rwandan nationals arrested were suspected to be involved in subversive activities against Uganda, including kidnapping and illegal repatriation of Rwandan refugees. Thousands of Rwandans live in Uganda peacefully.

Mfumukeko’s comments come when there is growing uncertainty within Rwanda with reports of several youths fleeing the country while others are making attempts to cross into Tanzania in fear of what they say is a recruitment of youthful Rwandans into the military. 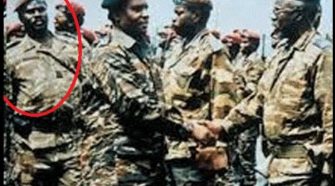