The nomination of candidates for Parliamentary and Presidential seats for the 2021 general elections will take place in October and November this year, respectively, according to a revised electoral roadmap released Tuesday.

Nomination for Parliamentary candidates is scheduled to take place October 12 and 13 while Presidential candidates will be nominated on November 2 and 3.

The Electoral Commission has finally released the revised electoral Roadmap, the first of its kind since it the electoral campaign duration has been shortened and mass rallies prohibited due to the Covid-19 threat.

The roadmap highlights the dates for commencement of various key electoral activities, namely, nominations, campaigns and polling for various elective positions, that is, Presidential, General Parliamentary and Local Government Councils.

It also highlights the period for conduct of elections for Special Interest Groups (Persons with Disability, Older Persons and Youth) Committees from Village to National Levels.

Polling is set to take place between January 10 next year and February 8. The EC says the exact dates for polling will be announced in due course.

EC Chairperson, Justice Simon Byabakama told reporters in Kampala on Tuesday that the Commission has lost three months of critical Roadmap activities due to the Covid lockdown.

In March when lockdown was declared, EC was already implementing preliminary activities such as update and display of the National Voters Register and Registers of Special interest groups.

These activities were postponed in response to measures to prevent the spread of the deadly Coronavirus since electoral activities involve public gatherings and hence pose high COVID19 risk of transmissions.

Byabakama said the postponement was inevitable. EC says the new roadmap has been revised with careful consideration of the operational requirements for the electoral activities and the legal framework governing the conduct of elections, however, under reduced time frames.

“Given the Covid-19 pandemic, and health risks involved and the expectations during the electoral activities, preparations and conduct of these elections will take different modes,” Justice Byabakama said.

“The Commission has done a risk analysis, the implications and instituted mitigation measures in line with the guidelines issued by the Ministry of Health. We have also considered the need to preserve the health of the Citizens vis a vis their constitutional and democratic right to elect leaders of their choice as guaranteed under the Constitution, and come up with a plan that ensures minimal person-to-person contact during the implementation of the electoral process,” he said.

The Commission will avail nomination forms on its website that can be printed by those with access to the internet. However, for those with no access to internet, hard copies will be availed. 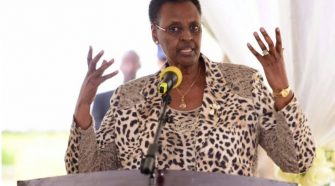