Kenzo became the first Ugandan to receive YouTube’s second prestigious award after the Diamond creator Award which is given to those above 10 million subscribers.

The Award makes him the highest paid Ugandan on YouTube dethroning comedian Anne Kansime from the top spot with over 1.12 million subscribers surpassing the comedy queen’s 977,000 subscribers.

The jubilant Kenzo wrote on his pages thanking his fans for the achievement.

“Team Eddy Kenzo our Gold is here. Thank you, everyone. Golden boy”.

The Gold Creator Award is given to channels that reach or surpass one million subscribers. It is made of gold-plated brass.

In March 2018, the look of the Gold Play Button was updated from a metal button housed within a window box with the channel’s name printed on the front glass pane to a cleaner-looking flat designed metal plaque award featuring the channel’s name embossed on it.

According to YouTube rankings, the only three Ugandan musicians with the most subscribed channels are Weasle, Spiece Diana, and Bebe Cool with 131,000, 109,000, and 94,400 subscribers respectively.

They are based on a channel’s subscriber count but are offered at the sole discretion of YouTube. Each channel is reviewed before an award is issued, to ensure that the channel follows the YouTube community guidelines. 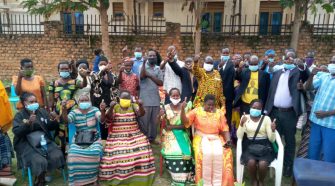