At the start of this month, video clips of nursing students being mercilessly whipped by some two people, went viral on social media, as they cried out for help, but in vain.

It would later be established that they were students of Ishaka Adventist School of Nursing and Midwifery, in Bushenyi district in Western Uganda. The students were being lashed by their instructors over escaping from the institution.

Now, Ministry of Education and Sports (MoES) has in a statement condemned the incident, terming it unethical and unprofessional and that it violates the policy that prohibits corporal punishments at all levels of learning in the country.

According to the Ministry’s Permanent Secretary, Kakooza Alex, the Ministry is already handling the case and investigations are underway.

“A team has been dispatched to the concerned institution to gather more information about the incident. Upon receipt of the report from these investigations, Ministry of Education and Sports together with Uganda Nurses and Midwives Council will take appropriate measures,” Kakooza said.

It is alleged that two students, a one Rebecca and Atuhaire Katusiime escaped from school and upon return, Deputy Principal Joab Rutakoba suspended them as a punishment for their illegality.

Together with the Clinical Instructor, Isaac Friday, Rutakoba lashed the two students on return from suspension as a way of preventing them from a repeat of their action.

The institution has since distanced itself from the embarrassing act and suspended the instructors in question whom it accuses of acting in their individual capacities since the school doesn’t condone such acts.

What is a corporal punishment?

Corporal punishment generally is any punishment in which physical force is used and intended to cause some degree of pain or discomfort, however, light.

It can be done through slapping, caning, pinching, being made to kneel while carrying stones in the sun, being forced to jump squats, mop toilets or simply humiliated and other personal insults.

Ministry of Education took up the decision to come up with a policy to ban corporal punishments in schools in the late 1990s before eliminating if from all schools and colleges in Uganda in 2006.

Is caning the only way of disciplining students? 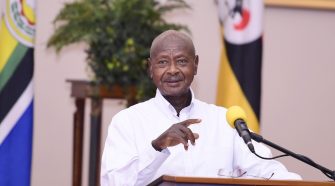