Government through the Ministry of Education and Sports has stopped Law Development Centre (LDC) from conducting online lectures and subsequent administering of online exams for its students.

This was revealed by the State Minister for Sports, Hamson Obua who was responding to the concern that raised by students through Kasilo County MP, Elijah Okupa.

Okupa noted that a number of law students at LDC have raised complaints about the arrangement by LDC to administer online lectures through Zoom during the Covid lockdown period. They say the process would be so costly.

Students from hard-to-reach areas noted that they find it hard to access the lectures since they have no access to stable internet connection.

Ministry officials have been summoned by Parliament to appear and explain to the House and the entire country why LDC would be allowed to go on and administer online lectures yet other universities like Uganda Christian University (UCU) Mukono were earlier stopped.

Addressing the House on Thursday, Obua noted that once the matter was raised in the House, the Ministry took interest and met with the LDC administration. It was discovered that indeed LDC was administering online lessons to students and was yet to conduct Exams.

According to Obua, LDC’s explanation was that the institution considered online teaching under the assumption that over 70 percent of students could access e-learning.

“We met with the management of LDC and agreed that they should stop the e-learning until government advises otherwise, they accepted to stop and they have stopped,” Obua said.

However, Aruu County MP, Odonga Otto wondered why government would go ahead to stop LDC from administering online lessons during the COVID-19 lockdown period yet it enjoys monopoly as the only institution that produces advocates in the country.

Ruling on the same, the Speaker of Parliament Rebecca Kadaga said there would be no issue if there were no students who had raised concerns to Parliament. 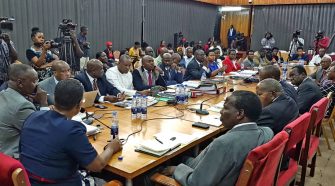