In a statement issued on Thursday evening, UPDF Spokesperson Brig Richard Karemire said that the General was being questioned on a matter the Army could not divulge yet.

“The General was indeed flown to Kampala from his farm in Kashagama – Lyantonde District and is being questioned on a matter the details of which we cannot at this point be divulged,” said Brig Karemire.

The Army spokesperson added that the General has access to his family and lawyers.

“He is currently at Makindye Military Barracks and accessible by his immediate family as well as his lawyers,” said the Army spokesperson

Earlier this year, senior police officers close to Gen Kayihura were detained and later produced before the Military Court Martial for crimes ranging from kidnap, illegal repatriation of refugees, murder and espionage.

A reliable military source told this site that the arrested officers implicated Gen Kayihura in murder and treason offences.

On Tuesday, the Chieftaincy of Military Intelligence (CMI) arrested former Flying Squad Commander, Herbert Muhangi, a day before Gen Kayihura was flown to Mbuya Headquarters on orders of Chief of Defence Forces, Gen David Muhoozi. Muhangi is a close confidant of the former police chief.

This website reported earlier this year that Gen Kayihura was likely to face prosecution by the Army Court following his alleged involvement in several undercover illegal operations. It now emerges that the General is indeed being questioned.

Brig Karemire did not divulge details regarding the questioning but said the media would be informed about any other developments.

Meanwhile, several of Kayihura confidants are being arrested in what many view as a sustained purge on rogue elements in the police force.

During the 2018/19 Budget Reading on Thursday, President Museveni vowed to crash criminals who have alarmed the population.

“People are sad, I am also sad, angry but confident that we shall crush all those who have been involved (in crime) and defeat them,” a visibly angry Museveni stated.

Ugandans on social media speculated that the President’s anger could be related to evidence linking the former police chief to crime. They said the President must have felt betrayed by a senior officer, Kayihura, who he entrusted with several assignments.

On the wave of crime, he promised to address the nation on what “we are doing to stop criminality.”

He re-echoed his earlier proposal to stop bond and bail for suspected murderers.

“I do not want to hear about police bond for suspected murderers. Bail for suspected killers should also be dropped,” Museveni said. 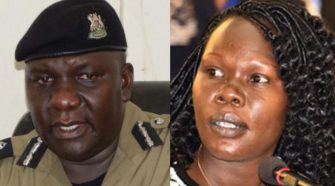 Police Beefs Up Anite’s Security Amid Allegations of Death Threats