“In Kalangala, we are having a low turnup probably because of fishing economic activity in the area, so there is a preference of the economic life to joining Police,” noted Enanga.

He said some people in Kalangala district and some other areas who are interested in joining Police have been locked by the age of entry and academic requirements, something he many of them do not meet the qualifications.

Individuals joining the Force as Probationer Police Constables must be aged between 19 and 22 years and must possess a UCE Certificate with five credits in English and Mathematics inclusive.

The Uganda Police is mandated by the constitution by the Supreme law under Uganda Police Force Act Cap 303, to protect life and property, prevent and detect crime, keep law and order and as well as maintenance of overall Security and Public Safety in Uganda.

As such, they recruiting are recruiting 4500 Probationer Police Constables across the country.

Enanga says in Gulu, Lira and Nwoya the turnup is overwhelming, with huge numbers of residents presenting themselves for recruitment into Police Force.

He says the current number of Police officers in the country is not sufficient enough to enable them perform satisfactory, adding that the recruited team will be of a greater advantage to the Force.

“Our numbers are not that sufficient, we are operating at about 43,000 out of the required 80,000, We are at about 51% optimum. The additional numbers of 50,000 and then immediately after there training, there is going to be a second recruitment of and additional 5,000, we expect that within the next two years will bring our numbers to probably 53,000,” explained Enanga.

He said as the population grows, the number of Police officers in the country needs to as well be increased for proper policing. 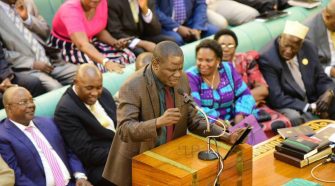