The Ministry of Energy and Mineral Development is set to update the country on the final plans to deal with the impending power shortage in West Nile region.

For several years, the West Nile region has suffered repeated power shortage despite the increased set up of industries as well as urbanization.

The region currently has 7.5 megawatts of hydroelectricity, which can only power small scale industries like welding and metal fabrication. The limited power supply is mainly because Nyagak power dam, operated by the West Nile Rural Electrification Company-WENRECO, was producing less power due to the low water levels in Nyagak River.

A year ago, the Minister of State for Energy Eng. Simon Du’janga revealed that government had secured a Shs 369 billion loan from the World Bank to boost power supply in the region.

While presenting a matter of National Importance at the floor of Parliament on Wednesday, Amudat Woman MP, Rosemary Nauwat said that despite government securing money from the World Bank, the power problem has not been solved.

“Government of Uganda borrowed money amounting to USD 10 million to extend power to West Nile and connect it to the national grid. We have heard from reliable sources information that there are some officials at the Ministry of Energy who are trying to tamper with this project instead of transmitting 132KVA Power to the West Nile region, they are planning to install a power supply of a lower capacity of 66KVA,” Nauwat said.

She noted that this is a serious matter and government should take keen interest and ensure the 132KVA power supply that was intended should is installed in West Nile.

While responding to the issue raised, the State Minister of Energy, Sarah Opendi asked that the Ministry be allowed time to present a comprehensive statement on the matter next week.

“I request that we respond to this issue next Tuesday since we have another statement to present regarding Rural Electrification Agency (REA). However, it is very unfortunate that we produce enough power yet we are only consuming 50 percent of what we produce,” Opendi said. 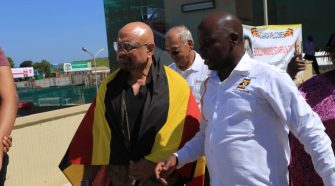