President Museveni has said that Uganda’s international airport at Entebbe, as well as all the land borders, will remain closed “until the situation abroad settles because there is so much chaos in some of these countries abroad”.

The President said that while Uganda is losing a lot of money from tourism due to closed borders, keeping Ugandans alive is a priority.

Uganda closed the Entebbe International Airport on March 23 to stop the importation of Covid-19 cases.

Only emergency humanitarian, evacuation, and cargo flights are permitted.

President Museveni has also responded to the naysayers of the ongoing lockdown. He laid emphasis on the need to protect life above anything else, arguing that without life, one cannot do anything.

He also lashed out at “selfish people” who mislead other Ugandans into not heeding measures to stem the spread of covid.

“I cannot equate survival with opportunity,” he underlined, his tone clearly emphatic.

As in his previous addresses, President Museveni has once again expressed appreciation for the contribution of scientists and scoffed at those who attack them.  He has called for scientists better pay.

“Anyone who attacks scientists should go to hell. If anyone attacks them, I will tell them to go to hell!”

The President has congratulated Ugandans – and especially the frontline health workers for battling Uganda’s science-led war against the coronavirus.

He then explained how, a couple of weeks into lockdown, they had to think about which economic, social and spiritual activities could be undertaken safely – without putting the lives of Ugandans at risk.

He briefly highlighted how the food markets were allowed to operate, as were essential services, and followed by the easing of more lockdown measures as the country took on a phased lifting of its lockdown in a bid to resuscitate the economy. 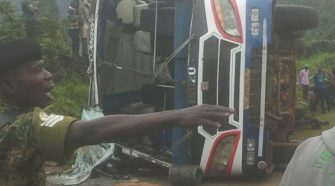