The Executive Director, Cross Cultural Foundation of Uganda (CCFU), Emily Drani has appealed to government to update laws and regulations for the protections of historical buildings and monuments in the country.

This was during the launch of the outputs produced in support to the protection of historical buildings in Kampala, Jinja and Entebbe by the European Union (EU) and the CCFU in partnership with the Ministry of Finance and the Ministry of Tourism on Monday.

“We ask that the laws are updated so that they take care of the historical buildings, we are particularly interested in listing the identified historical and architectural buildings that are so important and must be preserved,” Drani said.

Drani noted that there is need to nurture technical and competent people because heritage in Uganda is not taught in schools and as such, the country currently lacks experts in restoring historical properties.

“We call for research, education and public awareness which is under the mandate of the Ministry of Tourism. We also appeal for an incentive for those who have cared for and preserved the properties which can be in form of awards,” Drani added.

Speaking during the function, Ambassador Attilio said the campaign seeks to promote widely the outputs produced in the context of the project with the aim of displaying the hidden beauty of the three cities targeted by the project.

Attilio said the campaign is to also raise awareness about the importance of the built up heritage for the social fabric of the country and for paving the way for alternative, innovative and possibly green economic opportunities especially for youths.

The Permanent Secretary Ministry of Tourism, Doreen Katusiime noted that indeed there is need to update some of laws in the country adding that the Ministry is working to realize this.

“We understand that the process of amending the law can sometime be longer but the Ministry is working on The Museum and Monuments Bill and it is under draft by the first Parliamentary Council. We hope we shall be able to table it before Parliament this year,” Katusiime said.

On Saturday the EU Ambassador presented a copy of the newly launched photography book ‘Beyond the Reeds and Bricks’ on historical sites and buildings of significance in Uganda to President Museveni. 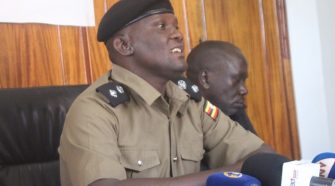 2 Police officers arrested for conniving with pastor to rob woman