Health Minister, Dr Jane Ruth Aceng says the Ugandan students who are trapped in the Chinese city of Wuhan where the Coronavirus broke out, can not be extracted because Uganda lacks capacity to isolate them.

For a week now, there has been an online campaign demanding that Ugandans in China be evacuated since they are at a high risk of obtaining Coronavirus. However, authorities insist the move could expose Ugandans to the infection.

Many countries have since stopped flights into and from China, to prevent possible spread of the virus.

On Thursday, Uganda’s Minister of Health explained that Uganda lacks the capacity to deal with suspected cases. She also said there is a high risk of infection, for travelers moving between Wuhan city and Beijing.

“Even crowding them [travelers] together in an airplane is a big risk. The WHO guidelines on repatriation are very clear on what should be followed,” Dr Aceng told reporters on the sidelines of an event in Kampala Thursday evening.

“And this means you don’t only assess capacity for surveillance but also specialized isolation facilities and equipment because the Coronavirus after causing its flu-like symptoms, may progress to cause respiratory distress,” she said.

“And that is the reason why I said currently Uganda doesn’t have this capacity. We don’t have specialised equipment to manage patients in the event that an outbreak starts”.

Given the speed at which it is spreading in China, she said that if this was in Uganda, the spread would be much faster.

“From a public health point of view, rather than risk bringing a case in, we need to consider also the 42 million people who are in Uganda”.

Earlier, the Minister told Parliament that government has already set aside Shs 226 million that will be dispatched to the Ugandan students in China.

Dr Aceng told reporters that this money is meant to cater for welfare – buying food and basic necessities. She dispelled claims that the stranded students are unable to purchase food items.

“People in China are buying food and it is not only Ugandans that are isolated. There is an online mechanism for delivering food items”.

Commenting on the misinformation that spread earlier on Thursday regarding three Chinese nationals in Mukono districts who had been reported as having confirmed cases, the Minister said this is false.

“The three suspected cases in Seeta (Mukono) have not presented any symptoms. Those are Chinese working in the staff factory that we isolated there”.

“We asked them to put on masks. People seeing them with masks, are assuming they have signs and symptoms. They don’t. We have been following them up on a daily basis, they are okay”. 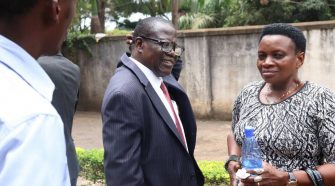