While some still ponder on the circumstances surrounding the muting of his voice at Galaxy FM to unveil his face on NTV Uganda, popular media personality and corporate events MC, Andrew Kyamagero has finally unmasked the truth behind his transition.

SoftPower News caught up with the self proclaimed ‘Omuntu wa Wansi’ in an exclusive interview to unravel the factors that occasioned his cross over to NTV.

Recently, Kyamagero posted; “I want to bid farewell to you all my radio fans and inform you that I am leaving my position at Galaxy FM 100.2. I have enjoyed working for this company and I appreciate having had this wonderful opportunity to work with the team, especially the morning team” on his social platforms.

Some of you might have already come across his teasers for his new show on TV, that has a lot to do with stepping out to help the viewer relate with the realities that an ordinary Ugandan encounters. The first episode of his segment premiered last week on Friday. In this one-on-one, he opens up on what inspired the decision to join NTV, what he will miss on radio and where he draws the enthusiasm towards work.

SoftPower: Why did you decide to quit Galaxy FM?

Andrew: That’s what everyone is asking me along the circles of my friends, but I want to make it clear that, whatever is happening to me now came with thorough planning and laying of strategies. I planned my grid, and the tag line of my program ‘Omuntu Wa Wansi’ was the one definite goal I always wanted to bring to life. I needed to catch up with it and when the opportunity arose, I was up for the challenge.

SoftPower: Corridor talk has it that you could have been fired. Is that true?

Andrew: That’s not true. Just like i said, i set out my plan so that by the time I left radio I would be in better position to take on another mind blowing task. For me, it was this program concept at the back of my head aimed at helping voice the concern of the often neglected voice of the common people.

I wanted to catch up with my dreams and NTV was the right place for me in this regard.

Secondly, by virtue of my age and years of experience in the media, this was a big and better deal given the fact that it would enable me to go national as opposed to a remote broadcast space.

SoftPower: Tell us briefly about your media journey

Andrew: I am a graduate of Journalism and Mass Communication from Kampala University. I started out as an English broadcaster from Touch FM and moved on to Galaxy FM where I have been for the last 3 years.

SoftPower: What special skills do you take from your former work place?

Andrew: Galaxy Radio sharpened my Luganda broadcasting skills, the local dialect was not my thing and that was a big challenge. I took it on with a lot of valour and delivered to the best of my knowledge.

It’s from this point that I realized how I was multitalented and skilled to take on other roles both at the station and beyond.

Galaxy FM gave me a platform to stand out and this is the core of my achievements today. There are so many good presenters in the city and across the country but I felt I was different because I associated more with the common people, “Omuntu wa Wansi” as my program always stated.

I endeavoured to see that their voices is heard. And whenever they did so, I was there to represent them especially for the youth who are scared of the unknown.

SoftPower: How did you broker that deal with NTV?

Andrew: They reached out to me and said they had a slot in their early morning edition which they wanted me to fill. I told them it was tricky because by then, I still had my morning show running at Galaxy FM. I asked to be given some time to consult with my colleagues and Management.

It was hard to disclose this boiling plan but it was worth sharing with my bosses on the likely vacuum that my resignation would create. When I told them about this ground plan, they asked me to study the space and gauge if it was a better deal but also acknowledge that this was a great deal for me as a brand.

SoftPower: Should we assume you have concretized your move to NTV?

Andrew: Yes. I signed a contract at the end of March and am simply warming up for my first guest appearance this week on Friday.

SoftPower: What will you miss at Galaxy?

Andrew: Definitely Dikhanio and Mariat, the crazy crew that kept the radio running every day. For me, it was more than just work. As a team had gotten fond of one another looking at the time we had spent together in this space.

SoftPower: What did you learn at Galaxy FM that you would equate to being your greatest strength?

Andrew: I learned to keep record of time. You do not need to mess up with your time. Set goals and work according to you plans. You will be there lousing around and before you realize, it’s ten years down the road and you have nothing to show as fruits of your work. That’s shameful. Set a plan and work out to see it come to fruition.

SoftPower: What does the new job mean to your social and side business?

Andrew: I hang a lot around comedians and musicians and this will not change. Being a corporate events MC for weddings and ground breaking ceremonies will not change too. I love people and this is the time for me to even cultivate my time and get to so many people than it was before.

My program is focused on people’s connection so I need to widen my network of friends through this new program of ‘Omuntu wa Wansi’.

SoftPower: Has the new role given you a second thought to realize who you are?

Andrew: To some extent, I would say yes. I need to try and find my ground as a journalist who is deeply rooted in the community while also hyping up my corporate emceeing skills beyond borders.

SoftPower: You just have days left to your maiden show on NTV. What do you anticipate?

Andrew: I am expecting a lot of bumpy and humpy rides and above all critics who are warming up and can not wait to see me make my debut appearance. I can only tell them one thing – I am not worried but ready to take on all critism and turn it into positive energy to propel my career and that of the crew I am going to work with into better programing.

SoftPower: What is that one thing you cannot do without?

Andrew: My Techno CX Camon (phone). That is my mobile office space, so I carry it with me. I would rather forget my wallet in the house and not my phone. You don’t know when a business pops up.

SoftPower: What do you think people need to know about you that they seem not to understand?

Andrew: When I hate some one, I hate them for life. I don’t forgive and let go that person for my own happiness. There are so many good things to cherish around. Why would something that gives you an attitude be an issue when you can actually do away with it in your own capacity. It is one thing that most of my friends seem not to understand but need to know.

SoftPower: What are you doing to keep up your appearance especially with fashion?

Andrew: My fans know me as a very smart guy, all these credits go to my dear wife, Ndagire Linda. She is my designer, she purchases all my clothes because she knows I am quite a busy guy. Whatever she brings for me is always a perfect match.

SoftPower: Speaking of fashion, how often do you empty your wardrobe?

Andrew: My wife buys me new shirts after every three month and for the pants it goes on for five months. I give out old clothes to the boys who help me with site work as well as give some to those at the washing bay.

SoftPower: Where do you get your daily inspiration from towards work?

Andrew: I get it all from my wife and my son, Mandella. They are the reasons I wake up every morning to go work, and when am down, they help bring me back on my foot. It is that family bond that every corporate person must labour to build on because happiness at home comes with great output at work. For me, they are the game changers and I am just an engine. 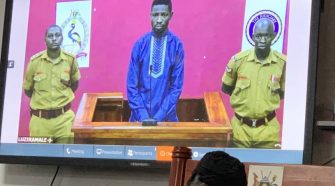 Bobi Wine’s Bail Application to Be Conducted Via Video Conferencing