Police in Gulu City on Tuesday evening arrested a man for impersonating a pastor.

Stephen Omaro –rwot, in thirties, is said to have been masquerading as a pastor of Zion Healing and Restoration Ministries Gulu Branch. He was netted near Centenary Bank in Gulu city at around 5 pm after a man he was soliciting money from tipped off police.

Dickens Akena, a resident of Pece in Gulu East Division told our reporter in an interview that Omaro –rwot started soliciting money from him last month when he promised to pray for his younger brother who is said to be possessed by evil spirits.

According to Akena, he became suspicious that Omaro –rwot is a false pastor when Omaro –rwot began demanding for money from him frequently but without praying for his brother and that by the time of his arrest, Omaro –rwot had already received UGX 215,000 from him.

“I have been sending him money totaling to almost 215,000 shillings before I realized that he is not a pastor of Zion Healing and Restoration Ministry. He used to call me demanding money.” Said Akena

“He went and saw my brother and promised to pray for him, but I realized that he is not a pastor. When I started coordinating with other people, I found the real pastor of Zion and later on, we plotted for his arrest,” Akena added

Sam Lawino, the Resident Pastor of Zion Healing and Restoration Ministries Gulu Branch revealed that Omaro –rwot is not a pastor and that his Ministry learnt with shock that Omaro –rwot has been soliciting money from people in exchange for prayers.

“This gentleman is not a member of Zion, not even a pastor at Zion, so we learnt that he has been getting a lot of money from people in exchange for prayers. Prayer is free because God says ‘I give you freely and you must also give them freely,” said Pastor Lawino.

Adding, “This gentleman has been getting money from many people and one of the victims came to see me at home, he was so angry.”

Lawino, however, said he is still receiving complaints from believers about imposters soliciting money from them in the name of Zion Healing and Restoration Ministry. He called for vigilance from the general public on such imposters.

John Bosco Nyangkol, the Officer In –Charge of Gulu Central Police Station confirmed the arrest and said police is carrying out investigations into the matter.

The case of conning has been registered at Gulu Central Police Station under SD 53/07/07/2020. 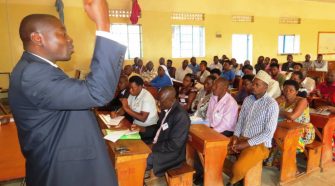