According to Yona Okoth Opondo, another young brother to the government’s mouth piece, Gaster was arrested on December 27 by unknown people allegedly driving in Ofwono Opondo’s vehicle from their country home in Tororo district.

Gaster had travelled to the village for the Christmas holidays. He was briefly detained at Tororo central Police Station before being driven to Kabalagala police station in Kampala.

Okoth told reporters on Wednesday, that after Gaster’s arrest, the family reached him at Tororo CPS and he told them that he had been brutally beaten and forced to drink urine.

Okoth added that their engagements with police in Tororo over information regarding his arrest, or having him released on Police bond, couldn’t yield results. Officers kept saying the matter was above them, he said.

On Saturday, Okoth says, Gaster contacted him on phone and told him that he was being ferried to an unknown place which he was told was Kibuli, but he would later find him at Kabalagala Police Station.

“We managed to make contacts and found out that he was brought here at Kabalagala Police Station but up to today, he has not made a statement and we have failed to secure a Police bond for him,” he said.

He explained that his brother has met several challenges since declaring his support for ‘People Power’ in October last year, with a one Mark Opowo accusing him of abusing him and elder brother Ofwono Opondo on social media. He says Opowo promised to have Gaster arrested.

On December 15, Gaster posted on his Facebook account and accused Opowo and Ofwono whom he described as greedy, and accused them of grabbing land belonging to Mulanda church of Uganda in Tororo district.

“To you two greedy selfish government officials Mark Opowo of Uganda Wildlife Authority and Ofwono Opondo the Uganda government Spokesperson, do not think by intimidating me, my mother and the people around me using security operatives and goons will shut my mouth from speaking the evil you have done by grabbing the community and poor people’s land of Mulanda Tororo district and the murders you have done on innocent Ugandans. I know this is the main reason as to why you stalk me,” read Gaster’s post on Facebook.

Okoth now says his brother Gaster should be availed justice and charged in courts of law other than holding him incommunicado.

“My plea as I stand here is that justice prevails. I only request that Dem is given his right, I think it is within everyone’s right to support every party he wants and if there are facts that he spoke things which were not true, let them produce him to court so that they can judge him correctly,” he noted.

He added that the family is worried about the fact that their person continues to be detained yet he did not get any medical attention after allegedly being beaten by Police officers while in Tororo.

Asked whether he talked to Ofwono Opondo over the issue, he responded in the affirmative. Okoth said the Uganda Media Centre boss instead vowed to “show Dem that he is above him since he has been abusing him” and asked Okoth to stay out of the issues.

“He is not willing at any one time to intervene in trying to release him. He said he will do whatever it takes to make sure that Dem is detained,” Okoth added.

Our efforts to reach Ofwono Opondo for a comment on the matter were futile since he couldn’t not receive our telephone calls. 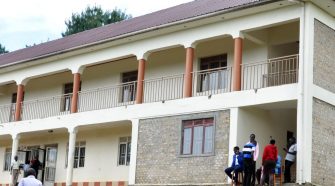