A week after the death of former minister Alhaji Akbar Adoko Nekyon, his family have asked the Police Department of Criminal Investigations to probe into what caused his death, citing possible murder.

Nyekon died last week on Friday May 4 and reports claimed he passed on at Nsambya Hospital where he was admitted for unspecified health complications.

However, his family through their lawyers Makmot Kibwanga and Company Advocates have contested the circumstances surrounding Nekyon’s death. They suspect that he was killed by close relatives of prominent politicians with whom he had financial and property issues.

In a letter dated May 8 titled ‘Reporting a potential homicide in the death of late Hon Hajj Akbar Adoko Nekyon’ to the Director of Criminal Investigations Department, the lawyers state that the former Minister died “under mysterious circumstances”.

As opposed to the account tying his death to Nsambya hospital, they say he died from a hotel room in the Sheraton Kampala Hotel room.

“At the time of his death, he was guarded at all times by at least 2 police officers and one of the officers called Ogweng Jimmy is reportedly under arrest and detained in a secret place,” the letter reads.

The lawyer further states: “Our clients are suspecting close family members, some prominent politicians who had financial and property issues with the late Nekyon and who have since his death been persistent trying to access his house”.

The family father alleges that some of the family members who lived with the deceased including a 10-year-old boy have since been harassed, trailed and threatened.

“In the premise, we seek to interest you to open an investigation on the late Hon Nekyon’s death. 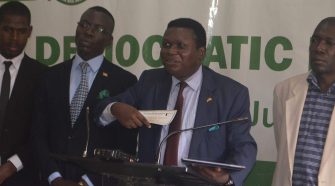