Burundi happens to be the birth place of my hero Prince Louis Rwagasore. Burundians are not drawn to spin or showcasing their country, so little is known outside of the biases and prejudices of archived material or contemporary writers, largely Anglophones.

Prince Rwagasore was a towering figure and certainly belonged to the league of Lumumba, Nkurumah and the like. Born of privilege (he was crown prince) he opted instead to champion the cause of the masses.

He was a leftist and pursued policies to egalitarianism in a country that had deep rooted class (some writers wrongly call the said classes ethnic groups) system with the Tutsi pastoralists at the top, Hutu cultivators at the bottom and the hunter gatherers the Twa largely living on the margins of life.

Rwagasore is credited for leading Burundi to independence with his party Union for National Progress (UPRONA) that he crafted together with leading Hutu politician Paul Mirerekano. He rallied critical mass across the class/ethnic divide and he was seen a uniting factor. He broke with custom and, he a prince married a Hutu Marie-Rose Ntamikevyo in 1959.

Prince Louis was assassinated by extremists right wing elements on 13 October 1961 days to his inauguration as Prime Minister of Burundi. His spouse and children were to be killed a year later and no trace of their bodies has ever been made.

He was assassinated along other political leaders from his community. There followed a coup by a young military officer aged 26 Michel Micombero who went on to unleash a reign of terror for the next decade. In 1972, he orchestrated a genocide against Hutu wherein upto 300,000 were slaughtered in April and May. Any Hutu who could read or write was eliminated save for those who fled to Rwanda and other neighbouring countries.

King Ntare IV who had been handed over by Idi Amin wasn’t spared and a number of the Abaganwa clan (the royal clan) in this episode of genocide. Pierre Nkurunziza’s father , Eustache Ngabisha a governor was killed.

The Nyamitwe brothers, one ex Foreign Minister and the other Communications Advisor to President Nkurunziza are some of the most prominent orphans of the period. Other genocides were to follow in 1988 and 1993 after the assassinations of President Ndadaye and 5 of his ministers.

Between 1993 and 1996 a fragile Government first under Cyprien Ntaryamira who was assassinated together with President Habyalimana and later Sylvestre Ntibantunganya was formed. Many attempts were made to fail it through parliamentary and Court processes culminating in a come back by Pierre Buyoya in 1996 through a coup de tat.

On 11 June 1995 The University of Burundi had been attacked by the army and Hutu students and faculty were specifically targeted. 100 of them lay dead. Evariste Ndayishimiye now President, is a survivor cutting short his law course to run into the bushes of the DRC.

It’s against that backdrop of the turmoil that Burundi went through that I wish to eulogise President Pierre Nkurunziza.

I first met him through a mutual friend now based in France, in Kampala in 2003. He and a number of FDD combatants had been facilitated to travel to Kampala by Ambassador Adonia Ayebare to make arrangements for their participation in the Arusha Peace Process.

They were given Ugandan passports including the new president. They were all young. In their 30s. I was a free spirited academic in my 20s Heading the Faculty of Law at KIU. In our frank discussions, what stood out from Nkurunziza was his desire to bury the hatchet and sue for reconciliation. He emphatically told me he knew the killers of his father and desired no revenge.

Our next meeting again through the mutual friend was in early 2005. He was minister for Good Governance this time in the Domitien Ndayizeye Government. On this occasion he had bigger ambitions. He was consulting and fundraising among friends among whom is a prominent pastor here in Uganda to run for President.

He was hardly 40 and I had heard of leading figures like Leonard Nyangoma, Hussein Radjab and Jean Minani who were much older and had played leading roles outside of the military. He had grand plans for the common man and promoting reconciliation, food security return of displaced persons and implementing universal primary education.

I frankly didn’t give him much of a chance. To my pleasant surprise he was elected overwhelmingly by parliament performing the task of an electoral college.

He embarked on his tasks with the energy and enthusiasm of a 40 year old. His annual budget was 150 m USD at the time he took charge. In the first three months he rolled out Universal Primary Education with hardly any resources. Many may not be in the know, President Museveni approved some 33 billion Uganda shillings (accumulated interest from a debt Uganda owed Burundi) for Burundi’s UPE giving them much needed scholastic materials and a head start.

The program was a resounding success. The food production programme took off with enthusiasm. Burundi having faced decades of displacement of persons had suffered perennial famine owing to insufficient food production.

Refugees were resettled and farm land up opened up. Burundi became self sufficient in food production and famine became part of its past. He negotiated a ceasefire and integration of FNL – Palipehutu of Hon. Agathon Rwasa.

Infrastructure projects were commenced on shoe string budgets. At the signing of the Arusha Accord, European Governments in awe of the “Madiba magic” that Mandela the facilitator of the talks had pledged billions of dollars to reconstruct Burundi.

The French Minister for International Cooperation pledged 760 EUROS to fund the reconciliation process. These promises remained on paper.

In one of his terms Nkurunziza appointed Maj. Bernard Busokoza who was one of the master minds of coup and assassination against Ndadaye as 1st Vice President. This gesture brought upon reassurances of reconciliation.

The outside world didn’t understand the enormity of the challenges President Nkurunziza was facing. The Disarmament, Demobilization and Resettlement programme supported by the international community was following the one size fits all format that had been rolled out in other countries. Ex combatants weren’t given psycho social support and psychiatric attention following many years of war that left a number of them suffering from PTSD.

They were left to their own devices. A travesty of post conflict reconstruction. In one I had meeting with the Moroccan born British representative of Ban Ki Moon on Burundi, he intimated to me that the role of the UN is facilitating dialogue and conflict resolution.

I am more drawn to conflict transformation rather than resolution. My discussions with him revealed the disjuncture the international community from our plight as East Africans. Conflict resolution is not enough. The underlying factors of conflict remain and very often resurgence occurs. We as Africans ought to turn post conflict societies into productive societies. Less of this we are pursuing futile efforts.

Enter 2015, Nkurunziza sought a third term in office. An ambiguity in law permitted him to run as both the Supreme Court of Burundi and the East African Court of Justice were later to rule.

Charles Rwomushana and David Pulkol were the discussants. From that sober discussion wherein Pulkol and Rwomushana (both ex spy chiefs) in their usual no holds barred approach revealed what I had carefully avoided to say.

They put all bluntly. Pointed fingers to the country that was orchestrating trouble in Burundi with details only persons with their experiences and access to information would have. It was given widen coverage in the media. Sheila Nduhukire gave the coverage prominence and interviewed Burundian exiles who failed to make their case. From that moment I became a marked person for my stand.

On December 29 President Museveni launched the Burundi dialogue at State House Entebbe. All the former Presidents attended. However, before the conference, there were attempts to disorganize it by the same forces behind the coup.

We managed to get briefs to President Museveni through persons whose permission I don’t have to disclose and as such will withhold them. They were scattered. One was deported.
On a number of occasions channels of communication would break down between Museveni and Nkurunziza. On one occasion they exchanged heavily worded letters leaked to the press to serve a purpose. Persons were driving a drift between them.

I consulted with our mutual friend with Nkurunziza, Amb. Ayebare. I got to President Nkurunziza who listened to my advice and agreed to work through special envoys. Many such special envoys met President Museveni and relations quickly improved.

These were enabled outside of official channels. There were persons both in Nkurunziza offices and President Museveni offices willing to make things happen as well as Amb. Jean Bosco Barege now accredited to Nairobi. I salute the persons for their contributions.

In 2018 I had a deep discussion with CNDD-FDD leaders. President Nkurunziza emphatically said he would step down in 2020. I don’t know if its blind faith, I did actually believe him. I posted it on my Facebook timeline then. The insults that were posted in reaction showed the kind of elite buying into narratives they don’t fully appreciate. On January 26 th 2020 the CNDD-FDD congress (national delegates conference) met to choose their flag bearer.

General Evariste Ndayishimiye emerged as their choice. Talk was that Nkurunziza preferred another candidate. He let democracy prevail.

Nkurunziza inherited a country torn apart by ethnic hatred. The old Burundi state pursued a policy of “ethnic” ( I call it class) apartheid. It now belongs to the dung heaps of history.

The challenges Burundi faces are now largely economic. The political divide has all representation from the ethnic groups. The most ardent supporters and critics of Nkurunziza belong to all “ethnic” groups. This aspect and his acceptance to hand over the baton even when the constitution permitted him two more terms have sealed his legacy his human failings notwithstanding.

President Pierre Nkurunziza, you brought honor and pride to us who had been demonized by a gullible world. I have ceased to mourn. I have now taken to celebrating your life. Eternal Repose for your soul!

Edgar Tabaro is an ex Senior Lecturer and Dean of Law now practicing law with keen interest in the Great Lakes Region. 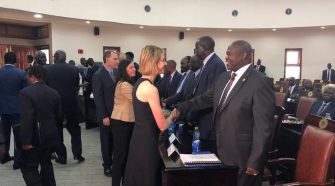