KABALE – Police in Kabale district is investigating a case in which a man allegedly stabbed his son and killed him after the two engaged in a fight over Chirstmas money.

It is reported that Muhozi Doroviko, 25, came home from Kampala ahead of the festive season and started asking his father, Besigye for some money to use during Christmas.

However, the father could not provide the money as he did not have any. The deceased then got annoyed and started fighting with the father, consequently stabbing him (father) in the back.

In retaliation, the father also grabbed the same knife and stabbed his son on several parts of the body.

The incident occurred on Friday, one day to Christmas at around 9am in Rwencuncu cell.

The Police Regional Spokesperson for Kigezi region, Elly Matte said that Besigye and his son were both rushed to Kisizi hospital for first aid but unfortunately Muhozi died shortly after.

The suspect remains in critical condition at Kisizi hospital, according to Matte.

Matte said that no arrest has been made so far but that Police is treating Besigye as a suspect and monitoring him closely.

“I want to condemn this fight between a father and son over minor issues that could have been sorted in an amicable manner,” Matte said.

He advised the youth to be contented with what they have achieved and to respect their parents even when they need something from them. 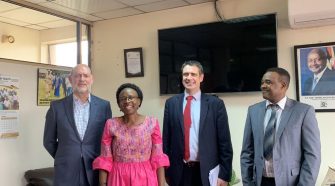