Forum for Democratic Change (FDC) has threatened to form a militia to counteract what he refered to as the heavy police and army deployment that often dominates elections in the country.

While addressing the media on Monday, the party mouthpiece, Ibrahim Semujju Nganda said that they have observed severally the heavy deployment of security forces which has often resulted into arbitrary arrests and assault of oppositions figures.

Despite all the incidents, Semujju says the Electoral Commission (E.C) a body that is mandated to conduct elections in the country, has kept a blind eye while Ugandans continue to suffer.

Semujju said that FDC has thus written to the Electoral Commission seeking a meeting with the party leadership to iron out such issues that continue to affect the electoral processes in the country.

“You remember what happened in Jinja, at one time, we had more soldiers and policemen nearly more than the people of Jinja,” Semujju said.

“We want to meet E.C to register our displeasure with the casual way they are conducting elections, but also put them on notice that if they fail to stop Museveni from deploying the military and police to intimidate and arrest people the way they did in Jinja, we as a party might be forced to form our own parallel militia of Ugandans who will go to police elections,” Semujju said.

Semujju observed that E.C has failed to prevail over President Museveni who has involved himself in early campaigns in Rukungiri Woman MP by-elections slated for late May.

A week ago, President Museveni visited Rukungiri district where he dished out a number of donations including; boda bodas, trucks, minibuses, milling machines as well as hard cash to several cooperative groups. The FDC was quick to to fault the President for engaging in what they termed as bribery.

“How can they allow a Chairman of the NRM party, after announcing that there will be an election in Rukungiri, to carry boda bodas and then they claim that he was performing his duties as the head of state?” Semujju said at Monday’s new conference held at the FDC headquarters at Najjanankumbi.

“We thought before we go into the other cycle of elections in the new districts and municipalities, we need to meet the Electoral Commission and put it to them, if they are overwhelmed by Museveni, we will help them and Rukungiri and other areas will serve as an example,” he said. 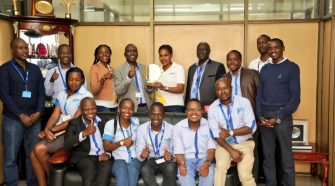