Uganda’s biggest opposition political party, Forum for Democratic Change (FDC) has come out to reject the new government regulations to political parties and organisations in the country on how to conduct political activities amidst the COVID-19 pandemic.

The new regulations were tabled before Parliament on Thursday by the Minister of Justice and Constitutional Affairs, Prof Ephraim Kamuntu.

Kamuntu told Parliament that the regulations are aimed at safeguarding the health of the participants at the same time without affecting political party activities.

However, while addressing the media during the party’s weekly press briefing, the FDC party spokesperson, Ibrahim Semujju Nganda said the party is opposed to the said regulations and asked Parliament to have them dismissed.

Semujju said the regulations are coming only to undermine the different party constitutions which specify how political activities are run internally.

“The FDC rejects these regulations that require political parties to hold virtual meetings as opposed to the normal meetings as well as calling for party organs to sit and decide a flag bearers and simply drafting resolutions for members to sign and approve,” Semujju said.

The regulations are against the Constitution which demands that political parties must be national in character and Democratic internally, he said.

“We understand this method of simply appointing leaders is not new in the NRM where a few people have always appointed the Presidential flag bearer. But this is not the case with FDC,” Semujju said.

He thus appealed to Parliament to reject the regulations adding that in case they are passed, the FDC party shall defy them and will move to implement their (FDC) Constitution in line with the National Constitution in observance of the measures that were put in place by World Health Organisation (WHO). 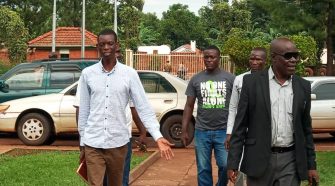