Forum for Democratic Change (FDC) Electoral Commission has assured Ugandans that the party is well set for the forthcoming elections in the 5 new created districts and 6 municipalities.

The party Electoral Commissioner, Hussein Lubega told the media on Monday that the party has finalized the process of sourcing for candidates that will carry the party flag in the new electoral areas.

The new districts which became effective on Ist July, 2017 include; Rukiga, Kyotera, Pakwach, Bunyangabo and Namisindwa.

The 9th Parliament as well created 6 municipalities as constituencies which include; Nebbi, Kotido, Ibanda, Njeru, Shema and Apac.

Last week, the National Electoral Commission (EC) issued a road map showing the different activities that shall lead to elections in the new districts.

Lubega said that the party has got all candidates and are ready to contest against any other contenders.

As FDC Electoral Commission, we have already organized our candidates for the newly created districts and Municipalities, so we have candidates ready to contest and we are currently printing posters for them, Lubega said.

Lubega noted that as has been the party practice to pay nomination fees for all its candidates, money has already been set aside as nomination fees to cater for the elections.

Commenting on availing particulars of the candidates, Lubega said that the results are yet to arrive at the party headquarters since most of the elections were carried out over the weekend.

Meanwhile the party has revealed that it has failed to organise their structure meeting in five districts as it was planned due to various reasons ranging from security to party preparations.

Lubega said that in the case of Kibuku district the resident district commissioner Margret Wazitonya stopped the process reasoning that she was not notified about it despite police clearing it.

In Yumbe the party electoral commission did not include the district and no funds were allocated.

The other districts which include Lukiga, Kyandodo East, Kabong, elections flopped due to poor management and organisation.

However, Lubega emphasised that by Wednesday this week they would have completed the structure elections since they have to compile the names of their delegates in one register which they are to copy to the party presidential candidates to be nominated on the 14th and 15th August. 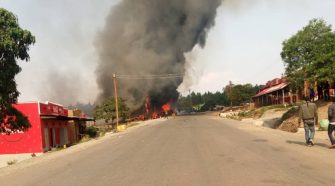