Opposition Forum for Democratic Change (FDC) is set to hold a special National Executive Committee (NEC) meeting this Wednesday as a first attempt to resolve the current differences within the party.

The leading opposition political party in the country is on the edge of a huge break up following the recent party Presidential elections last month that saw Gen Mugisha Muntu lose the top seat to Patrick Amuriat.

Since the election, Muntu has twice hinted on a possibility of separating from the FDC party. But he says he will pronounce his decision upon completion of nationwide consultations with party delegates which will carry through December.

The FDC Deputy Spokesperson, Paul Mwiru told journalists on Monday that new party President, Patrick Amuriat will early this week meet with the different Vice Presidents and later with the Executive Committee members to iron out a number of issues.

“The President is alive to the contradictions arising from the recently concluded elections and through his office, he is yet to meet the office of the Presidency and the Vice Presidents to discuss on how to run the party,” Mwiru said.

Mwiru noted that; “On Wednesday, he [Amuriat] is to meet the National Executive Committee (NEC) of the party. He is doing whatever is humanly possible to ensure that the office of the Presidency and that of the party chairperson and NEC deal with the issues as they arise.”

Mwiru dismissed allegations that the Party President is set to dissolve the opposition leadership in Parliament as well as relieving the LOP, Winnie Kiiza and the opposition Chief Whip, Ibrahim Semujju Nganda of their duties.

“It is premature for now to say that this is the step that has so far been taken, but it seems you want me to respond to speculations. The procedure is clear, there is no such proposal apparently it has not been discussed in any organ of the party.

Mwiru emphasized that the FDC party is not run by an individual, noting that the office of the President has a team that he works with. 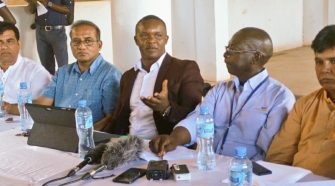