The opposition Forum for Democratic Change (FDC) has called on Ugandans to isolate all the 317 members of parliament who voted in support of the Presidential age limit removal from the constitution.

This was announced on Monday by the FDC President, Patrick Amuriat Oboi during a press conference at the party’s head offices in Najjankumbi.

He asked the public to consider the 317 legislators as outcasts to society who deserve to be isolated in all public places and businesses.

Amuriat said that isolation campaign does not need to be guarded by any law since the constitution is clear that citizens should do everything possible to defend it.

Other things the party intends to do include offering legal assistance to all the petitions filed against the age limit removal act, using their network across the country.

The party has promised to to announce other planned activities later in addition to putting in place a hot line to those who feel aggrieved.

In the wake of the passing of the contentious amendments, FDC strongman Kizza Besigye and other opposition leaders said Parliament had committed treason and that Ugandans had a constitutional obligation to defend it by whichever means including taking up guns.

But President Yoweri Museveni recently lauded the 317 for playing a significant role at a time Uganda was at “historical crossroads”. Museveni equated the 317 MPs (majority of whom were from the ruling NRM party) to the freedom fighters that liberated Uganda in 1986.

He thanked them for defying the intimidation and malignment by the opposition during the debate on the Bill.

Commenting on the spate of murders that have befallen the country in recent days, Amuriat appealed to the police chief Gen Kale Kayihura to step up the security operations in the country so as to put a stop to the mysterious murders.

Amuriat demanded that Gen Kayihura tells Ugandans who the perpetrators of these murders are. 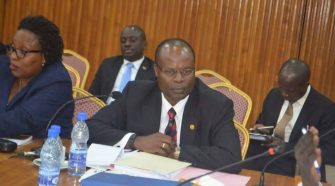