Forum for Democratic Change (FDC), the leading opposition party in the country has revealed that they do not intend to participate in any referendum that shall be organised in regard to the extension of the presidential term from 5 to 7 years.

The party President, Patrick Amuriat told the media at the party headquarters in Najjanankumbi that the party can not advise its members to participate in an election whose process is still questionable and challenged before courts of law.

Amuriat said that participating in the said election would be legitimizing the process under which parliamentarians passed the extension of their term of office.

“As FDC, we have never appreciated the conduct of any elections in the country since we became a party, from 2006 elections when Dr. Besigye ran as a candidate, elections have always been ridged,” Amuriat said.

“Under a dictatorship you should never expect to have a free electoral process, whether a referendum (an idea being voted) or an election on individual, so long as it is the same EC that runs it appointed by Museveni and influenced by his desire to rule forever,” Amuriat noted.

He added, “Whereas this is not the position of the party, it is very unlikely that we will participate in the referendum but we will cross the bridge when we are there.”

He observed that the party is still preoccupied with challenging the new Act and diverting to think of a referendum would be all the several activities that they intend to do. 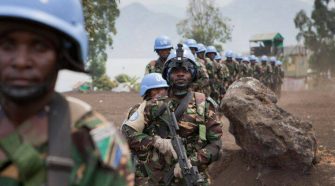 ADF Kill 14 in DRC in “Worst” Attack on UN Peacekeepers