Opposition Forum for Democratic Change (FDC) has called upon the Chief Justice Bart Katureebe to move swiftly and put his house to order so as to avoid more attacks on the Judges and Magistrates.

The FDC Deputy Spokesperson, John Kikonyogo told the media on Monday that it was unfortunate that the Buganda Road court Magistrate, Gladys Kamasanyu was assaulted with a water bottle while sentencing academic and researcher, Dr. Stella Nyanzi on Friday last week.

Kikonyogo said that the attack speaks to the increasing lack of trust in the judiciary as many Ugandans have been denied justice.

He told reporters that FDC is in agreement with the Chief Justice when he came out and condemned the attack on the judicial officer. Kikonyogo called for the expeditious trial of the suspects most of whom are FDC members.

According to Kikonyogo, on many occasions, people have been released by court and rearrested within the precincts of Court but the Chief Justice has not come out to take action on that.

“That is where we disagree with him (Katureebe). You are aware that there are many cases that have taken long before court and he should do more than what he is talking about. This is a result of loss of trust in the judiciary given the many cases that have unjustly been determined. People are not sure whether when they get to Court, they will achieve justice,” Kikonyogo noted.

He appealed to Katureebe to prioritize measures aimed at restoring public trust in the judicial processes.

Over the weekend, former FDC President and four-time Presidential candidate, Dr Kizza Besigye was criticized by a section of the public for justifying the violence against the judicial officer.

In a tweet, Besigye wrote that injustice is the strongest form of incitement of violence. Many read this to imply that Besigye was justifying the assault against Kamasanyu simply because Dr Stella Nyanzi had been convicted.

Besigye defended Stella, who had used abusive language (including flashing her middle fingers at court), saying she didn’t take up guns but simply used a pen “to protest abhorrent injustice and criminality”.

INJUSTICE is the strongest form of INCITEMENT TO VIOLENCE! All peace-loving Ugandans must fight injustice in order to enjoy sustainable peace.
Stella didn’t take up guns but a pen to protest abhorrent injustice &criminality.
Be strong; we shall overcome! https://t.co/XVdy8q8skS

But Dr, where is the injustice? Do you like Stella's actions? You are disappointing. Please have the guts to condemn Stella's actions, you can't want to lead this Pearl of Africa with such poor leadership skills

If Dr. KB does not have the decency to condenm a wrong (simply because it is done by his supporter) then how different is he from those (in power) whom he accuses of condoning illegalities, violance corruptiin etc?? …

Nyanzi was Thursday found guilty of cyber harassment and acquitted on charges of offensive communication by trial magistrate, Gladys Kamasanyu.

Prosecution contends that on September 16, 2018, Dr Nyanzi posted on her Facebook page suggestions deemed obscene against the President’s deceased mother and that she also repeatedly posted messages to disturb or attempted to disturb the peace, quiet or right to privacy of the President.

However, addressing a recent press conference at Nakasero State Lodge, President Museveni said he does not mind being annoyed.

On the other hand, Kikonyongo has appealed to the Chief Justice to ensure that justice prevails to the seven FDC members that were arrested during the fracas.

The arrested including; Ojobile Augustine, Fatumah Zaina, Joel Kabali, Simon Wanyera Abdullah Waiswa, Moses Katumba and Ingrid Turinawe who was later arrested when she took food for the suspects. 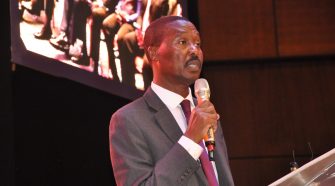