The leading opposition political party in Uganda, Forum for Democratic Change (FDC) has summoned an emergency meeting for the party’s top organ, National Executive Committee, to deliberate on the recent brutality by Police against Dr Kizza Besigye and other party members.

This was revealed Monday by FDC Publicity Secretary and Spokesperson, Ibrahim Semujju Nganda while addressing a weekly press briefing in Najjanankumbi.

“Following the brutality and terror unleashed by Uganda Police against FDC on November 4th in Kireka and November 6th at our headquarters, the party has summoned an emergency National Executive Committee (NEC) session this Friday November 15th to decide on the next action,” Semujju said.

It should be remembered that last Monday, security blocked a planned FDC party conference at the same venue. Heavily armed Police and military officers condoned off the stadium and turned away whoever approached the facility.

The frustrated party members decided to march in a procession from Mandela national stadium to their party headquarters in Najanankumbi but were intercepted by Police which used a water cannon and teargas to disperse the FDC supporters.

In the process, former FDC President, Dr Kizza Besigye was arrested and detained in what Police later said was a preventative measure.

Semujju also revealed plans to FDC is planning to hold its 15th anniversary celebrations on December 16, after a similar event was blocked by Police last week.

Semujju said the ceremony is aimed at reinvigorating Uganda’s leading opposition political party and will take place at Mandela National Stadium in Namboole in one of the facility’s parking spaces.

Over 10,000 FDC leaders and members from all over the country are expected to grace the ceremony as well as other invited leaders from sister political parties in Uganda and from the African continent.

“The FDC was born on December 16th 2004 out of a merger of three political platforms; Reform Agenda, Parliamentary Advocacy Forum (PAFO) and National Democratic Front (NDF). It is at this function that the FDC will unveil a robust programme that will guide the final push against the dictator and dictatorship,” Semujju said.

He said that the Party Secretary General, Nathan Nandala Mafabi has already written to the Inspector General of Police (IGP), Martin Okoth Ochola over the meeting as provided for by the Public Order Management Act (POMA).

“This time round, the letter has been copied to the Prime Minister, Ruhakana Rugunda  and the Minister of Internal Affairs. There has always been a tendency of them claiming that they were not aware of our meetings,” Semujju said. 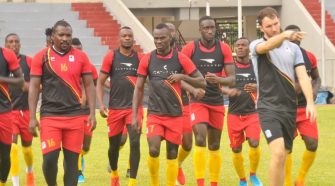