The Deputy Spokesperson of the opposition Party, Forum for Democratic Change (FDC), John Kikonyogo has revealed that the party has finalized all the necessary documents and evidence to file a case against errant police officers that recently brutalized former party President, Dr. Kizza Besigye.

Kikonyogo said this while addressing the party’s weekly press briefing at the party headquarters in Najjanankumbi on Monday.

Kikonyogo said the decision was taken by the party management in a meeting l held on November 14, 2019 which resolved to try all errant Police officers in Courts of law in their individual capacities.

“This is in line with the Human Rights (Enforcement) Act 2019 that was assented to on 31st March 2019 which clearly defines acts of torture, detention of suspects beyond 48 hours, denial of a right to a fair hearing among others,” Kikonyogo said.

In a circular dated July 3, the Inspector General of Police, Martin Okoth Ochola reminded all police officers against such archaic and barbaric acts of torture and affirmed that individual officers would be reprimanded for their acts.

“Unfortunately, even when such laws are assented to, Uganda Police and other security agencies seem to have reached a beyond redemption level that only our efforts will help fix,” Kikonyogo said.

The FDC mouthpiece noted that they have resolved to begin with the most recent top culprits that include ACP Dennis Namuwoza who was seen on camera trying to box and squeeze Dr. Besigye’s private parts and SSP Rashid Agero who smashed Dr. Besigye’s car wind screens and sprayed his eyes with a chemical yet to be identified.

Early this month, Dr. Kizza Besigye and other party members were blocked from holding a party seminar at Namboole National Stadium, upon resistance, Police resolved to use teargas and pepper spray to disperse the crowd.

During the process, SSP Agero was captured smashing Besigye’s car wind screens and was in command when an officer was seen spraying Besigye with pepper spray before he was arrested.

Commenting on Agero’s actions, the Police Spokesperson, Fred Enanga said there is no need to prosecute their Field Force Commander and his juniors.

He said what the officers did was within the confines of the law and well streamlined in standards police operations procedures.

Enanga said Besigye had parked his vehicle in the middle of road disrupting traffic flow at Spear Motors junction, and that he refused to adhere to all pleadings and engagements by Police who were left with no option but use all available means to clear the roads to allow smooth movement. 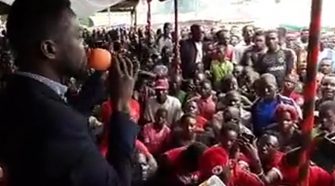