The Spokesperson of the Forum for Democratic Change (FDC) opposition party, Ibrahim Semujju Nganda has defended the opposition in the country for seeking support from the international community in the fight to deepen democracy in the country.

Semujju was responding to comments made by President Yoweri Museveni on Sunday when in a social media post he condemned the opposition for welcoming the sanctions slapped against the former Inspector General of Police (IGP), Gen. Kale Kayihura by the U.S. government.

“Before I comment on the action of the USA Govt in the matter of Kale, I should, first of all, say that, that excitement among some elements of the Opposition shows the poor quality of their spectacles when it comes to issues of Africa and Uganda. Why do they think that going to the USA or, indeed, any non-African country is so important that if you are not allowed there, it will amount to a painful punishment?” Museveni wondered.

The President went on to praise the beauty of Uganda adding that he believes no country on planet earth beats the natural endowments that Uganda possesses. He said it is actually a sacrifice for him to visit any non-African country on account of bad weather, strange foods etc.

Museveni noted that it would be so myopic for opposition to think that the only way to solve issues at home is by engaging foreign western powers yet there are available avenues on the African continent that can be explored.

According to the President, leaders of national Political Parties jubilating that a Ugandan is barred from entering the USA only goes to confirm that the opposition is pursuing misguided priorities.

Addressing the media on Monday, Semujju told President Museveni that he should understand that FDC is committed to seeing Uganda solving its issues but in case of a deficit, to seek external help.

“As FDC, we believe that Ugandans should be able to deal and solve their own problems but where there is a deficit, we will certainly bank on the world. You have seen where we have a budget deficit, Museveni has been with a bowl moving to every country begging for aid,” Semujju said.

Semujju emphasised that the same way President Museveni goes soliciting for money in terms of loans and donations, any Ugandan is free to go and beg for any additional support and effort towards the democratization of the country. 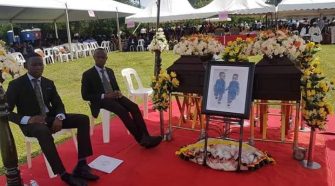