Opposition Forum for Democratic Change (FDC) wants the Minister of State for Investment and Privatization, Evelyn Anite summoned by Police to aid investigations into the death of the former Arua Municipality MP, Ibrahim Abiriga.

The NRM diehard, Abiriga alongside his bodyguard and brother Saidi Kongo were gunned down by unknown assailants in June 2018 while the legislator was on his way back home in Kawanda, Wakiso district.

While addressing the media early last week, the Minister noted that her life was under threat from mafias in government over her continued fight to save and revamp Uganda Telecom Limited.

Anite said that the mafias are not a joke adding that those doubting should ask the likes of the late Abiriga and Francis Ayume.

“These guys don’t joke, for me I will die with my mouth open, I will die while shouting, the mafias are coming….until they take me down and indeed they are coming and I have told you,” Anite told the media.

While addressing the press on Monday, the Deputy party Spokesperson, John Kikonyogo noted that Anite should be summoned to help in finding out who killed Abiriga since one year later, no suspect has ever been arrested as regards his death.

“All of us have been waiting to see who killed Abiriga, nobody has been arrested up to date. And we now have a volunteer who is telling the world that she may be killed like Abiriga. The Prime Minister should cause a meeting between her and the Minister of Internal Affairs to help offer such information that would lead to Abiriga’s killers,” Kikonyogo said.

Kikonyogo has also warned the Prime Minister, Ruhakana Rugunda against simply watering down the claims by Anite that there are mafias in government but rather call for investigations to establish the truth.

“We do believe it would be prudent for the Prime Minister to investigate and report back to the country over mafia claims. We also demand that the Prime Minister comes out and explain what is happening in UTL and if indeed there are no mafias why can’t government take it over?” Kikonyogo noted.

He has also accused the Prime Minister for looking on as the Ministers that he presides over are hurling insults against each other over UTL status.

“The Prime Minister should come out clear on the Ministers’ code of conduct, why does he simply look on when his Ministers are hurling insults against one another?” Kikonyogo asked.

“This is the only country in the world where Ministers can abuse each other and nothing happens to them, this is very dangerous for our children. They learn that whoever insults the other more wins the day and this happens when we continue to lose our assets,” Kikonyogo said.

Kikonyogo wondered how the Deputy Attorney General could call his fellow Minister a girl in a recent interview with a newspaper.

“If it occurred to her (Anite) that I could be a murderer, then we should take her to Butabika to get her head checked. Why would I murder a girl anyway? I know how to put girls to some other good use,” Deputy Attorney General, Mwesigwa Rukutana was quoted by The Observer newspaper as having said in response to allegations that he is behind the plot to eliminate Minister Anite. 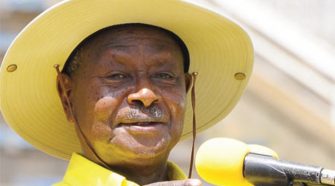 Museveni Threatens to Lock Up Officials who Extort Money from Investors