On January 4, Mother Nature sent her daughter storm Loyce to Kampala and surrounding areas to remind us who the matriarch is. The storm left a trail of damage and a reported death in areas it hit. If there was any doubt as to whether climate change is happening faster than reported, storm Loyce was here to clear that doubt.

Picture enthusiasts took amazing photos of Kampala’s skies which they proudly posted on social media. I actually loved those pictures. Once she landed, she was more furious than we ordinary folks imagined.

Trees, power lines and homes were destroyed. Electricity went off in many areas and the unenviable job of African utilities started taking shape.

Power utilities spend a lot of money in protection engineering. This is the ability of the electricity circuit to automatically switch power OFF, in case it is unsafe to continue supplying power in that circuit.

The closest protection equipment in our homes is the Main switch. When a main switch goes OFF, it is telling us that something is not right, and we should check it out before pushing it back into position. The main switch is then replicated on the national grid but on a large scale.

During a storm like Loyce, grid control engineers world over follow the strict order of; safety of persons, safety of the network and lastly, restoration of supply to affected customers.

Under safety of persons, the teams put priority on preventing harm, or even death, of persons. These could be members of staff or the public. They assess reports from field staff and calls of emergency nature coming though the reporting lines.

Those reports of broken wires, poles that come in through contact channels are processed ahead of “my power has gone off” because it is safer to explain darkness than to explain a death.

During this time, the public is encouraged, to continue filing reports of the broken power lines through available channels. Experience has shown me that it is prudent to only report life threatening situations. If millions were to report “power is off” at this time, the reporting system certainly wouldn’t cope.

Even the technician will probably be standing under the safety of a verandah waiting out the storm.

The second order is the safety of the network. Electricity can, within minutes, easily burn the network in which it is distributed, if the protection system fails.

During and after the storm, the engineers will be preoccupied with preventing this from occurring. If transformers, switches and wires burn during a storm, the cost of restoration can run in millions. That cost would end up in the bills we pay as repairs and maintenance.

The final order is the restoration of supply to affected customers. This is the hard part. Teams, some called out of their rest shifts will inspect the total length of high voltage lines to identify broken parts. Only sections of power lines that withered the storm would be energized. They could be in Kololo, Rubaga or Magere but this effort is apolitical.

The objective at this stage is to bring as many customers unto the grid as possible so that the Utility can also start making some sales. The other priority considerations would be hospitals, schools, police and communication infrastructure.

Broken sections would then be reconstructed in a cascading way beginning with those that, if resolved, more people would be powered.

Therefore a section that has 70 affected customers would not be reconstructed ahead of one with 150 customers.
Umeme has proposed to the regulator to sanction the deployment of concrete poles on the network to reduce the impact of bad weather on supply reliability. A new line of concrete poles was commissioned last year in Tororo, while another has been proposed in Northern Uganda.

While this proposal is being considered look out for any unsafe situation in your neighborhood, report it and remember it’s better to be alive in the dark, than be dead in a lit morgue.

The writer is the Manager Stakeholder Relations – UMEME 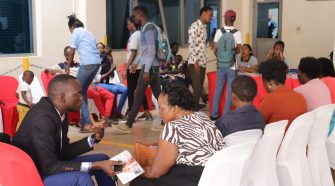