World Kick Boxing Federation champion, Moses Golola on Tuesday afternoon made a surprise visit to Parliament, leaving most of the legislators consumed by sheer excitement.

On announcing his presence by the Speaker Rebecca Kadaga, Golola who came along with his manager, Innocent Kawoya, beamed with smiles as MPs welcomed him to Parliament.

However, on a on a lighter note the Agago District woman MP, Franca Joan Akello raised a procedural matter wondering whether the female MPs in the chambers were safe in presence of Golola Moses. The kickboxer is known for his popular braggart statement “I am the only man who can look at a woman and she gets pregnant”.

“Madam Speaker, you mentioned that Golola is in the gallery and for us who are women we fear that we might get pregnant. I don’t know whether the House is proceeding well with the man in the gallery because when he just looks at a women, they get pregnant, I wonder whether we are not at risk,” Akello noted.

Akello’s submission left the entire House in laughter. Golola could don’t contain the joy either.

On a lighter note as well, the Speaker ruled advising female legislators not to dare look at Golala if they want to remain safe.

“…….what I can advise is that the ladies don’t look at him, you look elsewhere,” Kadaga ruled.

Golola had earlier in the day paid a courtesy visit to the Deputy Speaker of Parliament, Jacob Oulanyah and presented his championship belt.

During the visit, Golola revealed the plans of creating a state-of-the-art kick boxing academy that will promote ports among the youth.

He noted that his current training centre in Bwaise, Kawempe Division is still in dire need with lack of better facilities.

As such, Oulanyah pledged to support the transformation of the Golola Talent academy into a state of the art academy so that he can realize his dream.

The Deputy Speaker congratulated Golola for his recent win against Umar Semata in the century fight that was held at Freedom City. 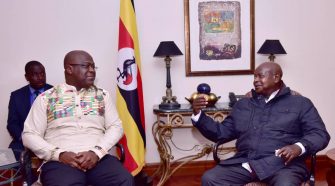