The National Female Youth MP, Anna Adeke Ebaju has come out to commend women who have so far come out publicly on their experiences of suffering rape, committing that she is willing to assist them access justice.

In a statement issued Friday by the Uganda Parliamentary Forum on Youth Affairs, Adeke who doubles as the National Chairperson of the body condemned what she called “heinous” and “monstrous” acts of rape against women.

It follows an online campaign over the last few days which has seen a torrent of rape allegations against a number of Ugandan men, some of them celebrities. Xfm radio presenter and TV host, Denzel Mwiyeretsi and gospel rapper, Ruyonga have been named as having committed acts of rape.

Other names cited are connected to incidents of groping, assault and rape against ladies, some of which are alleged to have been committed at night hangouts. Proponents of the online campaign insist justice must be served to the victims.

The campaign has also brought to the fore, the sticky issue of stigma that often surrounds rape, some arguing it is important that the victims come out to report their cases and provide evidence. Some anti-rape campaigners however say the failure to report rape to the authorities is often facilitated by among others incidents that have been reported but no action has been taken or even the trauma that victims have had to withstand after coming out publicly.

Others say most institutions still lack internal mechanisms to address rape allegations which usually results into the offenders getting away with their acts.

Also central to the latest campaign is the aspect of sexual consent which remains a grey area among majority of the Ugandan populace.

In the wake of the allegations, Anna Adeke the national female youth representative in Parliament has said; “I commend all these brave young ladies that have come out against these heinous but common vices” and promised “to stand with all those that come out to seek justice and promote their dignity”.

“The body of a lady is not only a temple of God like the man’s body is, but it is most importantly her body and therefore nothing can touch it without her express consent,” Adeke said.

“To all the ladies that have come out and those still gathering bravery to do so, I have prepared several courses of action for everyone to get justice and I wish to have all those affected reach me out”.

The legislator has also appealed to the individuals that have been running the online campaign against rape to get in touch with her on the same lines “so that together, we get justice for our girls and protect many other girls from this cruel, inhuman and degrading treatment by some men”.

She further appealed to civil society, private citizens and government Ministries, Departments and Agencies to join forces in fighting acts of rape.

Out of the 1,580 reported cases of rape, only 644 were taken to court and only 16 convictions were secured. 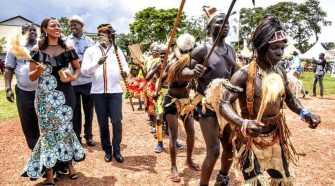