A group of 11 members of the ruling party, National Resistance Movement (NRM) have petitioned the Constitutional Court over the recent decision by the party’s top organ, Central Executive Committee (CEC) and Caucus to front President Yoweri Museveni as the party’s sole candidate for presidency in 2021 and beyond.

They say the decision by CEC at Chobe Safari Lodge in Nwoya district last month, contravenes several sections of the constitution and thus are “null and void to the extent of its inconsistency.”

“The resolution of the Central Executive Committee of the respondent (NRM) adopted on 19th February, 2019 at Chobe Safari Lodge in Nwoya district is inconsistent with and/or in contravention of articles 8A 71(1)(c) 45 and 99 (3) of the constitution of the republic of Uganda,” reads part of the petition a copy of which this news website has obtained.

The petition adds that CEC did not and does not have the mandate and legitimacy to pass the sole candidate resolution of President Museveni or any other candidate for purposes of 2021 Presidential elections and beyond, since its term of office and powers elapses by 30th June 2020.

The petitioners argue that the party’s constitution mandates its Electoral Commission to organize and carry out internal elections, but according to them, the announcement makes nomination of prospective candidates on the position impossible.

They say that because Museveni chaired the Chobe retreat, he used his overwhelming incumbency to extract a personal interest resolution of him being ring fenced as a sole candidate in the 2021 Presidential elections.

Days to the Parliamentary Caucus retreat in Kyankwanzi which adopted CEC resolutions, deputy government Chief Whip Solomon Silwany and the caucus Spokesperson, Margret Muhanga told reporters that the so-called NRM ‘rebel’ MPs were not welcome for the retreat, and indeed they did not attend.

Now, they petitioners argue that blocking them is inconsistent with various sections of the constitution of Uganda. They say that if internal democracy is to be embraced in the party, even the dissenting voices must be listened to.

Asked how they (petitioners) are excluded from party activities, MP Nsamba, one of the petitioners told SoftPower News that they are locked out whenever an important decision is about to be taken by the party.

“We are eleven MPs who subscribe to NRM and feel that there should be internal democracy within the party. It doesn’t matter how many times we were blocked, but the timing, the sole candidature announcement is an important issue which needed all of us to be there,” he said.

He says even when caucus convened to agree on extension of the tenure of MPs a couple of years ago, the same ‘rebel’ legislators were locked out.

“It has become a practice for them to kick us out whenever there issues they are to handle in an unclear way”.

The group is seeking a court decision on whether democracy can reign in the country yet it exists not within the political parties, Nsamba said.

Is the Country Ready For the New O-Level Curriculum Starting 2020?

American Tourist Maintains Uganda is Safe, Says Her Kidnapping Was the Exception to the Rule 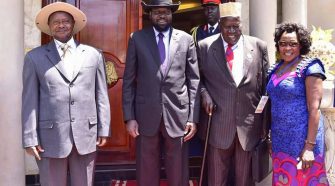