Police in Kisoro district has in its custody three men who were arrested at the Uganda - DR Congo border on suspicion that they harboured ill intentions.

The trio were arrested on Wednesday at Bunagana border with DR Congo by border security team as they were crossing into Congo, said the Police Spokesperson for Kigezi Region, Elly Matte.

“The three were suspected to be wrong elements,” Matte said in a statement.

The suspects have been identified as; Kirunda Mubaraka, 47, a resident of Jinja; Ssekanjeko Stephen, 27, a resident of Kamengo in Mpigi district; and Nsabimana Sserugendo Gideon, 33, a Congolese national. Sserugendo is said to be a casual worker of Mpigi town council.

“We have the three in custody. Of course as security and more especially at the border point, we became suspicious of them,” Matte said.

He said the three lacked relevant necessary documents to show where they were going and for which purpose. They also did not give a full account for their movements, Matte added.

“We have them being interrogated and the outcome will determine the way forward,” the Kigezi Police spokesperson said.

Asked what charges they face, Matte said this shall be determined after full interrogations, but added that as of now, “they are suspected wrong elements” that have “ill intentions”.

73 Candidates in Race as Nigerians Go to Presidential Polls Saturday

Kampala to Host ‘ICT for Devt’ Conference in April, Over 200 Speakers Lined Up 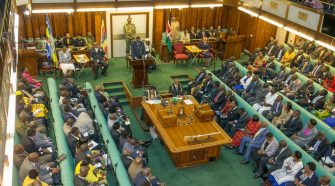