The Minister’s decision is contained in a letter she wrote to the Attorney General, William Byaruhanga.

In the letter, Minister Anite says government has encountered considerable difficulty dealing with the Administrator and has completely lost confidence in his ability to continue to serve the role of UTL Administrator.

“The purpose of this letter is to request you to urgently apply to court to replace the current Administrator within the the context of section 172 of the Insolvency Act, 2011 and the Insolvency Regulations (161 (1))”.

Anite adds: “I will be pleased to swear an Affidavit to support the Application wherein the supporting reasons will be elaborated. I implore you to have the petition filed without any delay to ensure that the Administration of the Company progresses without any issue”.

It should be recalled that Minister Anite nominated Bemanya as the Provisional Administrator of UTL in April 2017 on recommendation of the UTL Board.

The troubles of UTL began in February 2017 when the Libyan government which was the majority shareholder in UTL through UCOM limited took a decision to withdraw all its 5 Directors from UTL. Libya also directed that no further funds should be availed to UTL.

In a bid to protect the telco from imminent collapse, the government of Uganda took over management effective April 2017. Following serious cash flow shortages, capitalization challenges and insolvency petitions, government which was the only remaining shareholder decided to place UTL under receivership.

But recently, the Minister revealed to Parliament that government has for over months lost control over the affairs and management of UTL.

She said government is stuck with the Registrar General who has refused to be audited.

“I must report to the House that this morning, we had a meeting between the Attorney General, Ministry of Finance, the Auditor General and the Permanent Secretary, Ministry of Finance to find a way forward on how we can get accountability from the administrator on how UTL is being run,” Anite said.

“We were advised to liquidate UTL but as government, we chose to put up an administrative role which protects the company from being liquidated. The administrator was filing monthly reports but in January 2019, when the Minister of Finance wrote to Auditor General he said he could not audit the company because it is a court led process,” Anite said.

She added, “Whereas Ugandans are very sure that they have a government that watches over their shares, I want to tell you that I am afraid and announce to the nation that the watchman has stopped owners’ access to the house. We can’t go to UTL to find out what is happening”.

INVESTIGATION: Auditor General Wrote to Finance Advising Against an Audit on Insolvent UTL 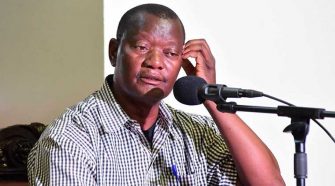