State Minister for Privatization and Investment, Evelyn Anite failed to provide a straight answer regarding her recent alleged secret trip to Mauritius where she reportedly met with Mauritius Telecom officials, saying she is a Minister charged with attracting investments and that she has no travel ban against her.

The Minister who was Monday asked by SoftPower News at a news conference to comment on the allegations raised in a whistleblower complaint to the IGG said there is no travel ban against her so she is entitled to traveling anywhere.

The whistleblower in letters to the IGG and Anti-corruption Unit of State House asked that the IGG investigates reports that Anite secretly travelled to Mauritius on a mission to irregularly seal the deal for a UTL strategic investor. The whistleblower contends that the motive, timing and nature of Aniteâ€™s discreet trip to Mauritius are very suspect, given the circumstances surrounding the insolvent UTL.

The complainant accuses Minister Anite of influence peddling, abuse of office, corruption and conduct unbecoming of a Minister and Honorable Member of Parliament.

The said trip was reportedly not booked in Uganda before her departure for USA. The whistleblower further states that in Mauritius, she met with the team responsible for ensuring this deal happens and they acquire UTL at a much less value than the asset value estimated at USD 84m. She later flew back to the USA and back to Uganda to disguise her trip to Mauritius, the whistleblower contends.

Responding to the allegations on Monday, Anite said: “Why do you care where i travel when Iâ€™m on leave? Did you hear there is a travel ban against me? Did you hear Iâ€™m not supposed to travel anywhere in the world?”

“Whether i have been there (Mauritius), itâ€™s not your business. I have classmates who know Iâ€™m in Harvard School of Business. They are Ugandans. Thatâ€™s why i need the IGG to carry out a public hearing”.

She said “we will comfirm whether i was in Mauritius or not” during the public hearing.

Regarding the IGG probe, she said she is ready to cooperate, although she said the investigation should be done in the public realm.

“Iâ€™m not fighting a personal fight. Iâ€™m fighting to liberate our country from these renown powerful thugs who have been entrenched in government and are used to getting off the hook each time they are in a scandal”.

“They have plotted that the IGG should investigate me. I do not fear any investigation, Iâ€™m not like them who run away from an audit. I donâ€™t use legal gymnastics,” she told reporters at her office.

She said that she has no relationship with the Mauritius Telecom.

“I have no relationship with Mauritius Telecom. The first time i came in contact with them was when the Administrator came to me and gave me the list of 7 companies that had interest in investing in UTL”.

“I want to be that example that if the IGG must investigate me, it should be in full glare of the media. And Iâ€™m here ready to answer any queries from the IGG”.

She however denied knowledge of any ongoing investigation saying she has not received any letter from the IGG to that effect.

When this news website spoke with the IGGâ€™s Office last week, the spokesperson said a petition relating to UTL had been received and that a query has been instituted to determine whether or not to initiate a probe.

Anite says she wants her legacy to be that she saved UTL.

“My issue is that that telecom is saved. I have tried three times to save that company. First attempt, we argued with the Attorney Generalâ€™s chambers who filed for liquidation and we won”.

“Now Iâ€™m asking for an audit, they donâ€™t want the audit. So, itâ€™s not about Bemanya, itâ€™s about a cartel”.

The Minister maintains she sided with Mauritius Telecom because the Financial Intelligence Authority (FIA) had in its due diligence report stated that Mauritius Telecom was the competent bidder since it had financial capability and experience.

She says that it emerged at the time that the promoters of some of the 7 companies that were bidding for UTL were government officials, some of whom are close to the President.

“If the report said it was Teleology, i would have gone with them”.

Kitagwenda: Visiting Ugandaâ€™s Home of Dinosaurs Could Become the Next Big Thing 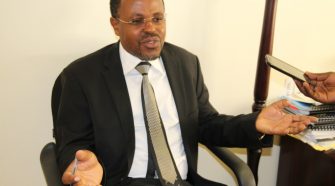