The driver identified as Kawooya Yasin was shot and killed on Monday evening following what is said to have been a chaotic situation during the Arua municipality by-election campaigns.

He was driving Bobi Wine’s personal vehicle, a black Tundra. By publication time, Kawooya’s body was still lying lifeless in the driver’s seat. Blood could be scene collected beneath the vehicle.

“Police has shot my driver dead thinking they’ve shot at me. My hotel is now cordoned off by police and SFC,” Bobi Wine tweeted an hour ago.

It is not yet clear exactly what circumstances led to the incident but NBS TV reported that supporters from the two camps in the race, that of Kassiano Wadri (Independent candidate) and that of Nusura Tiperu (NRM candidate) met in the town leading to commotion.

Bobi Wine has for the last days been camping in Arua to drum up support for Kassiano Wadri.

Monday had seen major rallies for all sides, including that of NRM where President Yoweri Museveni was present. Reports say that the chaos forced security to fire teargas and live ammunition to disperse the crowd.

We also understand that Mityana municipality MP, Francis Zaake has since been arrested.

When we spoke to somebody from the Bobi Wine camp on Monday evening to understand the situation on ground, he confirmed that the driver had indeed been shot.

He was speaking from Pacific Hotel in Arua town, which he said had been cordoned off.

“Everything is a mess right now. Our guy has been shot. Everyone is being arrested. Zaake is arrested,” Andre Natumanya alias Tabz who is Bobi Wine’s official photographer told SoftPower News.

“I am yet to confirm whether Bobi has been arrested,” he added.

When we asked what had preceeded the tragedy, Tabz who was short of time to speak on phone given the fluid situation only stated; “They just started shooting at our people because the people were very many”.

He however denied reports that Kassiano Wadri supporters had met with the NRM supporters.

“We did not meet anyone of NRM. Not anywhere. We actually met the people of FDC,” Tabz who often moves with Bobi Wine said.

The contradiction between his account and that reported by NBS TV unanswered questions regarding what exactly could have transpired that led to the death of Kawooya.

Asked who exactly shot at them as he claimed, Tabz said it was Police and Special Forces Command (SFC).

Police is yet to give an official statement.

KAYUNGA: Police to Further Dig Up Shrine Yard in Search of 3 More Bodies 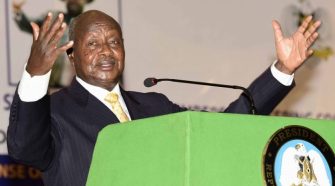