Members of Parliament (MP) sitting on the Committee of Commissions, Statutory Authority and State Enterprises (COSASE) have faulted officials from Bank of Uganda for irregular closure of the International Credit Bank Ltd (ICB) without an inventory report.

This came up during the interface between the committee members and Central Bank officials led by the Governor Emmanuel Mutebile and his Deputy, Louis Kasekende on Monday. The officials were responding to the audit queries that were raised in the Auditor General’s Special report on the closure of the seven defunct banks.

According to the Auditor General, there was no inventory report that was prepared after the closure of ICB.

In response, Bank of Uganda Officials noted that following the closure of lCB, an inventory of assets and liabilities was undertaken and that a condensed version was prepared by KPMG and tendered to the Auditor General.

Quoting Section 32(3) of the Financial Institutions Statute (FIS), 1993 S.31(3) cited as FtA, Cap 54 Laws of Uganda, 2000, Benedict Sekabira, the Director Financial Banking at BOU said the law only required the Central Bank, as soon as possible after taking possession of a financial institution, to make an inventory of the assets of the financial institution and transmit a copy to the Minister.

However, on the close look at the said report that was shared with the committee, it was found out that it fell short of content.

“The report that you have presented does not have the schedule of loans, the list of assets, the list of liabilities and the list of the securities,” noted the committee Chairperson, Abdul Katuntu.

Mbarara Municipality MP, Michael Tusiime who sits on the COSASE committee questioned how Bank of Uganda reached a decision to close the bank without an inventory report.

“Section 32 (3 and 4) of the FIS clearly points out that an inventory report is taken that is used to determine the insolvency of the bank,” Tusiime said.

“According to the law, there must be an inventory to justify the closure. What they [BOU officials] are submitting as an inventory is as at the date of closure. Where is the inventory that was prepared and submitted to the Minister before closure to give you a justification for closing the bank,” Tusiime asked.

In response, the Statutory Manager for Imperial and Crane Bank, Edward Katimbo Mugwanya noted that, “What is relevant is defining what an inventory is. As far as I can see, the balance sheet as at the date of closure satisfies that”.

“The inventory is not done before the bank is closed because it is done by BOU after the Board has been set aside,” he further told the committee.

However, Katimbo’s response was found by the legislators to be lacking prompting them to subject him to an oath.

After several exchanges on both sides, Katuntu ruled that the committee shall have to write that there was no inventory report and shall take a decision.

“For purposes of record, we have what is called an inception report which was made 2 years after the closure of the bank,” Katuntu said. 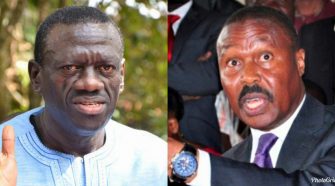