GOMA - Opposition parties in the Democratic Republic of Congo (DRC) have picked a single candidate for the Presidential election in December 23 in a bid to defeat President Joseph Kabila’s successor.

Martin Fayulu, fronted by opposition parties after a meeting in Geneva on Sunday, will lead a coalition against Emmanuel Ramazani Shadary, a former Interior Minister also the ruling coalition’s candidate.

Kabila appointed Shadary to represent his political party late this year because the Constitution barred him from seeking a third term in office.

The opinion polls showed Tshisekedi in the lead with 36 percent of the vote ahead of 16 percent for Shadary, according to a poll by the Congo Research Group at New York University and Congolese polling firm BERCI.

Fayulu, 61, is a former oil executive is the head of the Engagement for Citizenship and Development party.

He served as auditor and later Director General of US group, Mobil. In 2006, he was elected into Parliament.

He played a lead role in several of the marches against Kabila extending his rule beyond constitutional limits. He was arrested several times during opposition demonstrations in Kinshasa and elsewhere, once being struck in the head with a rubber bullet. 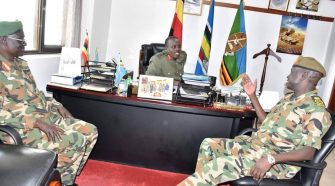