“I can tell you without the slightest fear of contradiction that Erias Lukwago would make a good President of this country. I have no doubt,” Besigye said while appearing on talk show on NTV Uganda Thursday night.

Last week, Lukwago who has been in the Democratic Party for the last two decades was unveiled to the public by the Forum for Democratic Change (FDC), as a member of the party.

The Kampala Mayor who also serves as the Vice President of the Dr Kizza Besigye led ‘People’s Government’ pressure group, has for long disagreed with the leadership of Norbert Mao. On joining FDC, Lukwago revealed that he had taken the decision to join the party as a seasoned politician not as a political schemer. He asked people including fellow politicians to respect his decision.

His defection however led many analysts to speculate that Lukwago was likely to replace Besigye as FDC’s Presidential flag bearer for these elections.

FDC was scheduled to hold a Delegates Conference this week, during which the Presidential flag holder would be picked. However, the conference was extended.

Besigye said Lukwago is qualified, he has been tested and that he thinks he would make a good President.

“He is focused to make sure that whatever it takes to get what to lead, he will do it. Whatever call is made to him, he will not be found wanting,” said Besigye.

“If the FDC thought that maybe now, tactically he is better, I’m sure Lukwago will not be found wanting. He will lead the fight, which is great”.

Lukwago was an FDC ally far before he officially joined the party. In recent years, he became Besigye’s right hand man during the numerous campaigns and other political activities. He also served as legal counsel in court cases involving Dr Besigye.

According to Besigye, Lukwago has demonstrated that he can withstand the winds, citing a period when he was denied his salary and there were attempts to trim his powers.

“He [Lukwago] stands firm. And is focused on people’s agenda not his own. Erias Lukwago has been in Kampala fighting for the ordinary people who are being thrown out of markets and terrorized by all kinds of interests in the city”.

Besigye says FDC has what it takes and downplayed the sentiments that the party has failed to front a Presidential candidate to challenge President Museveni in next year’s elections.

2 hours ago
News in PicturesPeople 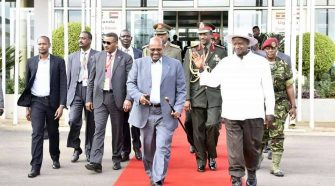